You are here: Home / Historical Romance / A Deal with the Earl by Sadie Bosque 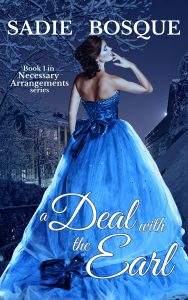 Theirs is a marriage of convenience.

Lady Julia has dreamed of marrying her childhood sweetheart since she was four years old. Unfortunately, her father has other plans. He has his sights on her marrying an earl. When she is forced into an unwanted betrothal, Julie needs to make a choice: wait for her true love and destroy her honor, or make a deal with the forbidding earl.

He vowed to never love again…

Robert, the earl of Clydesdale, has sworn off love. A marriage of convenience is more to his liking. So he wasn’t about to turn away a beautiful young lady’s plea for help in exchange for her hand in marriage. But once he spends more time with his betrothed, his icy heart begins to melt. Only his betrothed is in love with another. Now Robert has a choice, either lock his heart away and live in misery, or take a risk and fight for the woman he loves.

What Inspired You to Write Your Book?
I loved reading since I was a child. Since my teenage years, my favorite books were the classics, because of the language and the flow of writing. But I quickly realized that romance was a necessary part of a good book for me. This is when I discovered a perfect mix of both, the beautiful language and steaming romance: historical romance books.

My love for reading and my personal experiences combined inspired this particular book. The heros go through some agonizing stuff to get to their HEA, just like real life. My life is also prominently involved with people with special needs, and I have a special character in my novel as well.

How Did You Come up With Your Characters?
Mostly, the characters come to me in my head. They talk to me and dictate their traits, their journeys. However, some of the characters are based off real people. For instance, I use some actual historical events for inspiration and all of that is touched upon in my book and is explained at the back. In the interest of not spoiling anything, I'd prefer people to read the book and then the inscription at the back.

Book Sample
The bitter taste in his mouth accompanied Robert all morning on his wedding day. He sensed he was making a huge mistake. What if Lady Julie was truly in love with someone else, and he was ruining her life? Would her father let her marry that other man if he cried-off, or was he saving her from a worse fate? The doubt plagued him all the way to the altar.
The feelings intensified as he entered the church, seeing the throng of people who all waited for his wedding. Everyone except for his bride, who was either late or not coming at all. His nerves got the best of him, and he was ready to call off another of his weddings before it could even start. But all his turmoil stilled once he saw his bride coming down the aisle.
She wore a hideous pitch-black gown with a ridiculously long train. Her gloves, her veil, and even her slippers were also black. Think what he must about his bride, but she knew how to make a statement. With this ridiculous display of a gown, she showed the ton, her father, and most of all him what she thought about this marriage. It was not a celebration; it was a mourning of love lost. He should feel bitter toward her or even angry. Somehow, he only felt admiration and something akin to pride. His lips twitched in laughter as she stood in front of him. He couldn’t help but admire this young girl who’d made a deal to marry him so she could get her sister, or as his grandmother thought, her daughter out of the asylum. This girl didn’t care for his title and money and showed it to the world with her mockery of a wedding gown.
His expression completely changed as she lifted her veil, and he saw her pale, troubled face. She was not enjoying the joke, the wedding, or anything that was happening. She was repulsed by the mere idea of being married to him. His eyes took on a stony expression as he stared down at her and saw his entire future. The silent dinners, the cold nights together, the accusation in her eyes every time she looked at him. He almost stopped the wedding right at that moment.
What was the alternative? Marrying anybody else would yield the same results. With one difference, they would pretend affection before the wedding and cuckold him to their hearts’ content once they married. Robert took a deep breath. Please, God, let this all turn out all right. He took her icy hands in his and squeezed them tight. As if assuring himself that she wouldn’t run off, as if assuring himself that he wouldn’t run either.
“Dearly beloved,” the priest began.

Author Bio:
Sadie Bosque is a pen name, or an alter ego, if you like, of a sheltered young lady from the outskirts of the world. The one who broke free by reading and subsequently writing romance novels.

The author uses her secret identity to write steamy historical romance novels by night, hoping to create the perfect escape for people like her. Extremely introverted, the author likes her privacy, but will divulge her writing process and ideas on her social media.