You are here: Home / Romance / After All These Years – Finale by D.D. Bartholomew 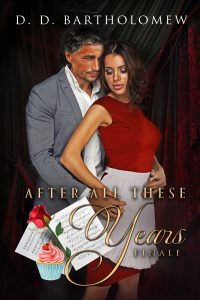 Denise just got her life back in order. Then he showed up on her doorstep to beg forgiveness.

Vincenzo cheated on her – and if that wasn’t enough, it was publicized for all the world to see.

Now, pregnant with Vincenzo’s child, Denise faces the ultimate choice: strike out as a single mother or take one more chance on love….

What Inspired You to Write Your Book?
I started writing this book as a kind of therapy, with the idea that only I would see it. Then I discovered I had written almost an entire book, so I thought I'd re-arrange it to take out the more personal parts. At some point I realize that my characters were in control and I had no say in the matter anymore

How Did You Come up With Your Characters?
I've also been involved with the world of classical music as long as I can remember. I work and volunteer at the Metropolitan Opera so it was easy to think up characters; all I did was look around me.

Book Sample
Numbness. That was all Denise was feeling as she sat on the porch, her luggage at her side. Waiting for the taxi, she stared off into space, trying not to break down. All she could think about was Vincenzo. His betrayal had cut her to the quick, as if he’d shoved a knife into her heart, and she didn’t think she’d ever get over seeing the photo in the magazine of him with his arms around another woman.

The taxi pulled up to the house to take her to the airport. Denise got in. As they drove down the driveway to the entrance gate, she turned around and looked out of the back window to see the house for the last time. Her heart was breaking, so much so that she could almost feel a physical pain and her hand automatically went to her chest. The whole time, she was fighting the tears, not wanting to have to explain them to anyone or make it look like she was going to fall apart.

Talking to him won’t change the fact that he did it. If I want to heal from this, I need to go now.

Pulling up to the curb at the airport, she saw a sign pointing towards the HelloSky area; it almost seemed as if the airport were laughing at her. After checking her baggage, she proceeded to the departure gate. As she walked through the airport she was reminded of when she had arrived in Rome to meet Vincenzo’s family and to spend time with him. Everything reminded her of him. Now, as she strolled around the area looking at the restaurants and stores, her feet felt as heavy as lead and all she wanted to do was crawl under the waiting room seats into a fetal position and stay there for the rest of her life.

NOTE: This is the second half of the 'duet' series 'After All These Years'

Author Bio:
D.D. Bartholomew was born in Brooklyn, NY and has live in, Australia, Canada and in Japan. After 40 plus years in the corporate world, she gave it up and retired.

Opera is her passion, both listening and performing. She volunteers at the Metropolitan Opera in New York City and can most often be found at the membership desk on the Grand Tier.

She’s published numerous articles on VOCAL. This book is the second part to the 'duet' series After All These Years