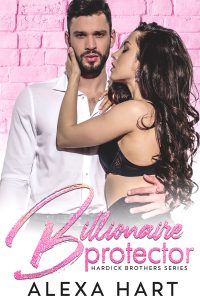 What does a girl like me know about mansions, fancy parties and rubbing elbows with Denver’s elite?
NOTHING! Absolutely nothing. This just isn’t my world.
And how can I ever trust him after what I’ve been through?

But I feel myself falling hard and fast.
Losing my sanity a little more after each toe-curling night with him.

Love just isn’t in the cards for me though.
I don’t need the complication – I literally can’t take the chance.
If he finds out who I am… where I come from… the things I’ve done…

My past is catching up to me quickly… I can feel it.
Should I keep running, or trust that I might actually be safe here… with him?

BILLIONAIRE PROTECTOR IS BOOK 1 OF THE CAPTIVATING HARDICK BROTHERS SERIES.

What Inspired You to Write Your Book?
Mystery and suspense were calling to me. I wanted to tell the story of a woman with a very troubled past, who stumbles upon not only the love of her life, but a fortune bigger than anything she ever dreamed of.

How Did You Come up With Your Characters?
Billionaire Protector's heroine inspired the entire Hardick Brothers Series. Her past is captivating and was a story that I felt compelled to tell. Through her eyes, we meet the Hardick family, and instantly fall in love with the hot billionaire Hardick brothers.