You are here: Home / Cowboy / Call Me Home: A Colorado Cowboy Romance Story by Lindsey Cowherd 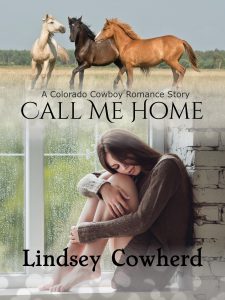 Welcome back to Fairview Ranch in Gunnison, County, Colorado, where healing hearts and healing horses is all in a day’s work.
In this second installment in the series, a woman abandoned by her husband and left penniless (except for her three, precious horses) is going to get a taste of what it means to be shown love and support–ranch style!
Moving from the East Coast to Colorado with her husband was supposed to be the adventure of her life; however, for Rene Madden, her dream has taken a shocking turn. In just a few, short months, the lovely creep-of-a-man not only abandons her to a dump of a property but also takes all of her inheritance–minus her three, precious horses. Distraught and without any support, Rene decides to truck-it to Denver, where her childhood friend lives, to figure out how to salvage her life. Little does she know, fate has other plans for her..
A tragic accident completely derails the trip but also places her in the graces of a remarkable family and their staff. With unexpected and unprecedented ease, Rene is welcomed to the Murphy family’s ranch to heal from her wounds. With their help and support, Rene finds that, sometimes, hope and destiny can be found in the most heart-rending of circumstances.

What Inspired You to Write Your Book?
I love cowboy romance books but missed reading stories that feel as if the author has experience around a ranch/horses. In the two books I've written in the series so far: My Texas Streak and Call Me Home, I hope that readers feel as if they're experiencing a feel-good romance story and real-life ranch culture all in one.

How Did You Come up With Your Characters?
The one main character is pulled over from the first book (My Texas Streak). It was Seth's turn to get his happy ending.
Rene Madden just came to me out of the blue to counter his story…

Despite being licensed as an acupuncturist since 2010, Lindsey still finds time for the small stuff: writing, watching almost anything Asian on streaming, singing and playing guitar, and especially enjoying time with her horses and dog.

She started writing as a young teen; the Assassins' Guild books being among the first full-length novels she ever thought up beyond her normal obsession with horses. Next, was her enthralling and detailed series the Crystals of Syre. Turning to a world immersed in martial arts, magic, and “places not of this world” has given her an outlet from everyday living and circumstances out of her control.

In 2019, Lindsey has also delved into the genre of cowboy romances.