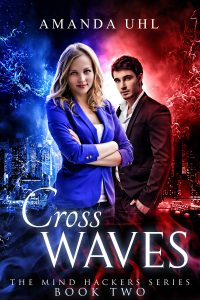 She can kill with a thought.
Gifted with an explosive psychic talent, Geneva Ericksen can’t risk letting Rolf Jorgensen in her life. If she does, she might accidentally kill him. But when Rolf’s sister goes missing, Geneva and her extraordinary abilities may be his only hope to find her.

He’s hiding a deadly secret.
Rolf’s not about to let Geneva slip away from him, even if it means protecting her from his dark gift. As Rolf and Geneva trail his sister, they soon uncover a life-threatening plot: someone is attempting to profit from stealing and trapping their power in crystals.

To outsmart the enemy, it will take all their combined strength. But can they trust each other enough to survive?

“A non-stop reading experience that jumps off the pages from start to finish!” — Tome Tender Book Blog

“I read this book in one sitting and the excitement didn’t let up for a minute.” — Paranormal Romance Guild

“As the story progresses, the tension builds and my heart was pounding in anticipation. I read it in one sitting. That’s how good this book really is…one of the best romances I have read in a long while.” — Bookbub Reviewer

“Filled with suspense and intrigue, it is a fast-paced action-packed story that will entertain everyone who has a penchant for tales with super-normal protagonists fighting super-normal villains.” — Reader’s Favorite

“Fast paced, with many amazing characters, this book will have you holding your breathe while you rush to read the next chapter.” — Goodreads Reviewer

“One good book. I was thoroughly impressed.” — Goodreads Reviewer

“A well written book with strong characters and an intriguing story line. The author had me glued to the pages.” — Goodreads Reviewer

“I started reading and I was immediately drawn into the story. Add to that, I’m so anxious to read the next one with Nonna making me want to! Who’s Nonna? Read the book and find out. Highly recommend!” — Amazon Vine Voice Reviewer

“From the very beginning this book will draw you in and keep you pulled in…I couldn’t put it down.” — Amazon Reviewer
“I enjoyed each turn of the page.” — Goodreads Reviewer

“The storyline kept me on my toes, with its mystery and suspense pulling me in. I was very entertained.” — Goodreads Reviewer

Curl up in bed or a comfortable chair and read this book in one sitting. You will not want to be distracted. Action—here it comes. — Amazon Reviewer

“It has so many twists, you just cannot guess which way it is going…” — Amazon Reviewer

“I whipped through the pages and stayed up late reading. Yes, it was that good. If you’re looking for a paranormal romantic thriller you’ll lose sleep over, pick up Cross Waves. Highly recommend!” — NN Light Book Blogger and Reviewer

“Cross Waves is about the power of love and the strength that comes from knowing someone believes in you and will always be in your corner.” — Amazon Reviewer

“Unique with its paranormal element and the idea that the government would use people’s psychic abilities for both honorable and nefarious purposes. It will definitely keep you on the edge of your seat.” — Lady With a Quill

“An exciting story that kept me in suspense from the start and thrilled me with its many surprises.” — Genre Minx Book Review

What Inspired You to Write Your Book?
Cross Waves is the second book in the Mind Hackers series. The series was inspired by my day job in cyber security and my love of beach glass, which I routinely gather on the shores of Lake Erie. One day while all alone on the beach, I wondered: What if a man were reading a woman’s mind and they had no idea, and the man fell in love with the woman, what would happen next? That’s the inspiration behind the first book in the series, Mind Waves, which is continued in book two. Cross Waves features a female talent who is so gifted she can kill with a thought. Readers will wonder: Can she have a normal relationship? What about when she’s angry with her partner? And what if her partner has and equally explosive gift? What will happen next? You’ll have to read the book to find out!

How Did You Come up With Your Characters?
I wanted characters who seemed real and not like cartoon characters. Even though these characters have extraordinary abilities the action takes place in the real world. Readers have asked me: Is there really a Cognitive Mind Unit (the government organization where the mind hackers work)? The abilities also runs in families, so the characters are members of a close knit group. Just like in many families, not everyone in the family is a hero or heroine and each member has flaws.

Book Sample
The click-clack of high-heeled footsteps echoed down the corridor outside the office. Only one woman on the team pounded the floor like that—Geneva Ericksen, the most powerful female trainer in the ranks of the CMU. Every hacker required a trainer. They magnified brain waves, allowing hackers to infiltrate the mind without being physically near a target. But he wished he could avoid this particular trainer.

He swallowed the mint and frowned, almost missing the wince in Peter’s gaze. “This better be necessary.” Rolf stepped around the desk and lowered himself into the chair tucked in the corner of the room, facing the door. Once settled, he drew his energy inward and listened as the heels stopped outside the office.

The door flung open, and there she stood, all five feet two of golden mightiness. Power shimmered in the air. His gaze traveled from the top of Geneva’s sleek blonde head, passed over her slim form in a navy-blue dress, and stopped at her hot-pink heels. A familiar and unwelcome excitement curled in his gut as she stepped inside the room, leaving the door open behind her. Paper clips vibrated in a canister on Peter’s desk, a sure sign Geneva was feeling intense emotion, probably anger.

“Be seated.” Peter came from behind the desk and closed the door. “And stop the jiggling, would you? I’ve got a migraine.”

Geneva remained standing, her small hands fisted against each hip. She took a deep, harsh breath, held it a moment, then two, before releasing the spent air on a controlled exhale. The paper clips stilled. “Give me someone else. Anyone else. I’ll take your newest recruit if you’d like. Just keep Jorgensen far away from me.”

“I’m afraid that’s impossible,” Rolf said, stretching his legs in front of him and drawling the words since he knew it annoyed her. On instinct, he probed her mind and found a weak spot in her mental safeguards.

Her wide gaze settled on his. He caught the flash of fear and irritation flitting across her face. Her eyes narrowed and focused. A picture of a donkey’s ass appeared in his mind.

He clenched his jaw but managed a smile, refusing to acknowledge the mental imagery she sent. A gate slammed into his brain, forcing him to withdraw from her thoughts. An icy pain burned a pathway down his spinal cord. But it was worth it. It was always worth it. He fixed a grin on his face and waited.

Peter turned on his desk light and sighed, the sound slow and heavy. He squinted, pinching the bridge of his nose. “I’ve never understood the animosity between you two. You worked well together on the Willard case. At least, you survived intact.”

Geneva stuck her nose in the air, reminding Rolf of an annoyed Cupid. “We were part of a team. And I wasn’t paired with Rolf. He’s impossible to work with.” Gauntlet thrown, her gaze locked on Rolf’s, challenging him to disagree.

“As you well know, your former partner has retired,” Peter said to Geneva. “You need a new one, and…your test results came back today.”

Her gaze flicked from Rolf’s to Peter’s. “And?”

“You two are a perfect match.”

Rolf frowned and uncurled his fingers. He didn’t need any government-run tests to know they’d be a match. He’d known her talent resonated with his since they were kids.

Rolf pressed his twitching lips into a firm line before a smile slipped free.

Author Bio:
Amanda Uhl has always had a fascination with the mystical. Having drawn her first breath in a century home rumored to be haunted, you might say she was "born" into it. After a brief stint in college as a paid psychic, Amanda graduated with a bachelor of fine arts in theatre and a master's degree in marketing. Over the past twenty years, she has worked as an admissions representative and graphic designer, owned her own freelance writing company, and managed communications for several Fortune 500 companies, most recently specializing in cyber security. Amanda is an avid reader and writes fast-paced, paranormal romantic suspense and humorous contemporary romance from her home in Cleveland, Ohio. When she's not reading or writing, you can find Amanda with her husband and three children, gathering beach glass on the Lake Erie shoreline or biking in Cuyahoga Valley National Park.