You are here: Home / Romantic Suspense / Cursed by Peter Gray 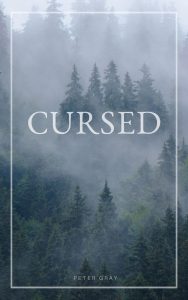 It’s Halloween weekend, and Sara and her friends decide to go out into the wilderness to stay at Blackthorn Campground. When they arrive the campsite is eerily quiet, and the only lodger living there is quite adamant that they should leave. Sara and her friends choose to stay at the camp site, forcing them to face the consequences of their own actions.

What Inspired You to Write Your Book?
My readers asked me to come up with a scary short story as a lead up to Halloween weekend. I posted a chapter each day for five days straight, leaving the final chapter for a chilling read on Halloween night. The story generated so many positive responses that I decided to upload it as an ebook on Amazon Kindle. The folklore of werewolves inspired me to write a romance story surrounding a character that just so happens to fall in love with a man withholding a terrible secret- a secret that can only be revealed when there is a full moon.

How Did You Come up With Your Characters?
I am an avid fanfic writer, so the character's appearances were partially based on that. The characterization and personalities, however, are my own creation. I attempted to emulate certain behaviours that would reflect a wolf/werewolf, enough to rouse suspicion as the main character, Sara, explores Blackthorn Campground and the mysterious caretaker that lives there on his own. There are a lot of red flags, so she becomes sort of a detective in a way, though she is blinded by the feelings she is developing for this mysterious man.

Book Sample
Damian had his pants rolled up as he dipped his feet in the cold water. A happy sigh escaped him, before he slid downwards and let his ankles plummet into the frigid water. I was standing over him, carefully removing my socks and shoes. Damian assured me it was perfectly safe to sit over this cliff, so I took his advice and took a seat right next to him. “This river goes on for miles,” he informed me. “And then it opens up into a lake.”

“Is that where you fish?”

“You seem happier here,” I noted.

“I don’t think that is the right word,” he chuckled. “But I guess so.” Damian pulled his feet out of the water and went on his knees in front of me. I was caught off guard by his stare, the desire emitting from his eyes. A hand gently rubbed the side of my jawline, tilting my head forward until it was facing his own. He tried to kiss me gently, but I could tell how hard it was to hold back his carnal desire. I tilted my head downwards and quietly asked for him to wait, slipping my legs out of the icy river until I could sit in front of him. A small breath escaped his open lips with anticipation, only satisfied when my cool blue eyes lifted upwards to settle over his. Damian bit down on his lip unexpectedly, looking like he was doing his best to hold something back.

“You want to kiss me that way again,” I noted, since I could sense his silent thoughts.

I smiled at him nervously, knowing what he was implying.

“You ever hear what happens to a lone wolf when it meets its mate?”

“They mate for life,” he breathed out softly, and let his hand hover over my shoulder that was furthest from me. “Life, Sara.”

I was the first to press my lips against his, making him react in kind to push me hard against the rocky floor. He straddled me suddenly, kissing my lips with a flurry of energy that came out of nowhere. It was irresistible, the pure carnal desire, the strength of animal instincts that wanted to take me as his own. I couldn’t even keep up with his kisses, feeling my eyes close with ecstasy the more he squished his face against me. The hairs along his chin and jawline brushed against my face, his hands were clenching the side of my waist and hip as he demanded more from my body. I tilted my head away to simply catch my breath, feeling his nose and mouth pressed against my cheek as he kissed the hollow concave. I felt so heavily aroused, aware of the burning sensation down below by the way he was touching me. “Damian,” escaped my lips before I could hold it back, which made him lift a hand to tilt my head in his direction.

“Yes, love,” he said in a husky voice, low and raspy for me to know he was not himself. He crushed his lips against mine before I had time to respond, while the other worked on the zipper of my sweater. I let him zip it downwards, keenly aware of his mouth that was steadily creeping its way over to my left jawline to hit the most sensitive spots with his lips. I groaned out mercifully, knowing even if I wanted to hold it back I couldn’t. The sweater was unleashed, and Damian instantly brought his hand underneath my long sleeve shirt to drag it up my abdomen.

“Damian,” I whispered, aroused by his hot hand gliding over my skin. He brought our lips together again, sealing our fate before I had a chance to change my mind. A hand fisted my shirt to drag it upwards, only stopping so he could part his lips. He dipped his head downwards to get at my freshly exposed skin, letting his tongue dab at the area occasionally between random placed kisses.

“You smell so good,” he breathed out, making me think of the rosy bath bomb he offered to me last night. “And taste…” He paused to bring his face downwards, kissing just over my beltline. “You taste amazing, sweetie,” he uttered in a strangely dark voice.

Author Bio:
Note to readers that Peter Gray is my pen name. I have decided to disguise my identity due to my profession. I write romance novels set in a fantasy and Gothic horror settings. I have always been drawn to the mystery of a tall, dark and handsome stranger, and "Cursed" is the perfect example of what can happen when a brave heroine meets such a character.

Cursed was written as a challenge for some friends to get ready for Halloween weekend. I wrote a chapter each day, posting the fifth and final chapter on Halloween night for a chilling read. I am proud of this work and I am thankful for Amazon's Kindle to allow me to share this story with the rest of the world.

Links to Purchase eBooks
Link To Buy Cursed On Amazon