You are here: Home / Erotica / Fatal Love by Colin Guest 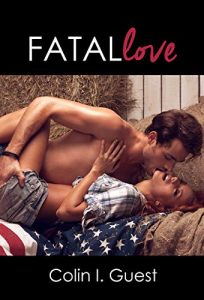 Before marrying Ian, Melissa and he enjoyed making love whenever they could. However, after a few years of being married, Ian is no longer interested in either Melissa or making love. After Ian dies in a traffic accident, Diane, Melissa’s best friend later takes her to the opening of a new club. While they are there, Melissa meets a man named Steve. After he takes her home and they enjoy a bit of hanky panky, it puts Melissa in the mood for sex. As a result, she goes out and buy some sexy underwear, then asks Steve to take her to the club. When they leave, and Steve takes Melissa home, they enjoy a sizzling session of lovemaking. He later moves in with Mellissa who is once again happy and enjoying a loving and caring relationship. Some months later, Melissa and Steve get married. At first, all goes well with their marriage, and then Steve starts to act a bit strange. He gets paranoid about Melissa’s safety and has burglar bars fitted to all their ground floor windows while she is out with Diane. If this was not bad enough, to Melissa’s dismay, Steve actions grow even stranger. It makes her worry about her safety.
While she and Diane are at the gym, Mary, an ex-nurse, comes up and speaks to Melissa. She is shocked when Mary informs her that Steve was once a patient in a psychiatric hospital. It does, however, explain Steve’s sudden mood swings. On returning from the gym, she finds Steve convinced that someone is watching the house. Melissa makes the mistake of telling Steve that something apart from work is causing his strange actions. On hearing this, Steve goes berserk and attacks Melissa. After hitting her she falls onto a glass top coffee table that smashes into pieces. Despite Melissa begging Steve to stop, he then starts to strangle her. On the verge of passing out on the floor, Melissa’s fingers encounter a piece of broken glass. She picks it up and blindly thrust it up at Steve. Although she had not intended to kill him, the glass pierces his neck, and Steve dies. At his inquest, the coroner clears Melissa of any charges. After two failed marriages, Melissa decides she has enough of men. She gets herself a rescue dog, and from then on is happy and content with her life.

How Did You Come up With Your Characters?
I just think up names that I think match the characters in the book.

Book Sample
As they wandered around, Diane nudged Melissa. “Here are some crotchless briefs – they're enough to turn on any man.”
Melissa eyed her friend. “So, did they do the trick?”
A blush coloured Diane’s cheek. “To be honest, I’ve never tried them, but I'm sure they would.”
After a good look at various items, Melissa bought four pairs of silky briefs. Although not crotchless, two were thongs, which both women agreed looked great. She also bought two filmy bras and two lacy negligees, one light blue, the other pale green.
Seeing what Melissa had bought, Diane's eyes lit up. “Well, anyone seeing you in one of those will think themselves in heaven.” Melissa rolled her eyes. “I don’t know if I would go that far.” She smiled to herself. But you could be right.
Steve stopped and looked up. Melissa saw his eyes were bright with excitement. “I love the taste of your pussy; it turns me on.” He then bent down and continued licking and sucking her clitoris.
Melissa became more and more excited, with her moans of passion growing louder and louder. As a shuddering orgasm shot through her, Melissa gasped, and then reached down to stop Steve’s action. “Enough,” she told him. “I want to feel your cock inside me.”
Steve needed no encouragement. He climbed on top of Melissa and thrust his cock deep inside her pussy.
Melissa gasped. “Oh, yes, this is what I like.” She raised her legs, wrapping them around his waist, and lifted her hips.
As they arched up together, Melissa’s eyes were glittering like diamonds. It was the first time in years that she had enjoyed such extreme feelings of pleasure. Melissa loved sex and making love with Steve had turned her on. It was part of her life that had been missing for far too long. Thanks to Steve, she had become alive again.
For his part, Steve felt in heaven as Melissa stroked his balls and touched him all over as he moved in and out. He became so excited from her doing this; he had a job preventing himself from coming. He wanted to enjoy the incredible feelings Melissa was giving him for as long as possible.

Author Bio:
Colin Guest (1940-2017) Born in England. He became an expat worker in 1983 and in 1988 obtained a contract down on the Turkish Mediterranean Coast. Here he and his late wife had a house built and moved to live there from their home in England. After her death in 2007, Colin later married a Turkish lady and now lives in Istanbul. Colin’s first book, An Expats Experiences of Living in Turkey, covers his living in Turkey for over 30 years. His second Follow in the Tigerman's Footsteps is intended to help readers discover that there is more to life than a tedious 9-5 job. Although a memoir, it reads more like an adventure story, with Colin living a life most only dream. Since then, Colin has had the following books published.
Terror Holiday, For the Greater Good, Impending Disaster and Fatal Love. Desperation Rules the Day is the first of a trilogy of published books re a planned terrorist attack on America. The second is Never Pull the Tiger’s Tail, with Colin now in the process of writing the sequel. He has recently completed the manuscript for Suzy’s Dilemma, which like A Dangerous Love Affair and Fatal love is a romance story mixed with erotica. Seven of Colin's books are available as audiobooks via Amazon ACX with one more due for completion shortly. Due to Colin’s deep concern about nature and the environment, he supports several organisations. These include Sea Shepherd and Care for the Wild/Born Free. From the latter, Colin has adopted a tiger for the past ten years. He worked as a volunteer at Wildlife Rescue/Rehabilitation centres in South Africa and Thailand and recommends animal lovers try this as a way of giving something back to nature.