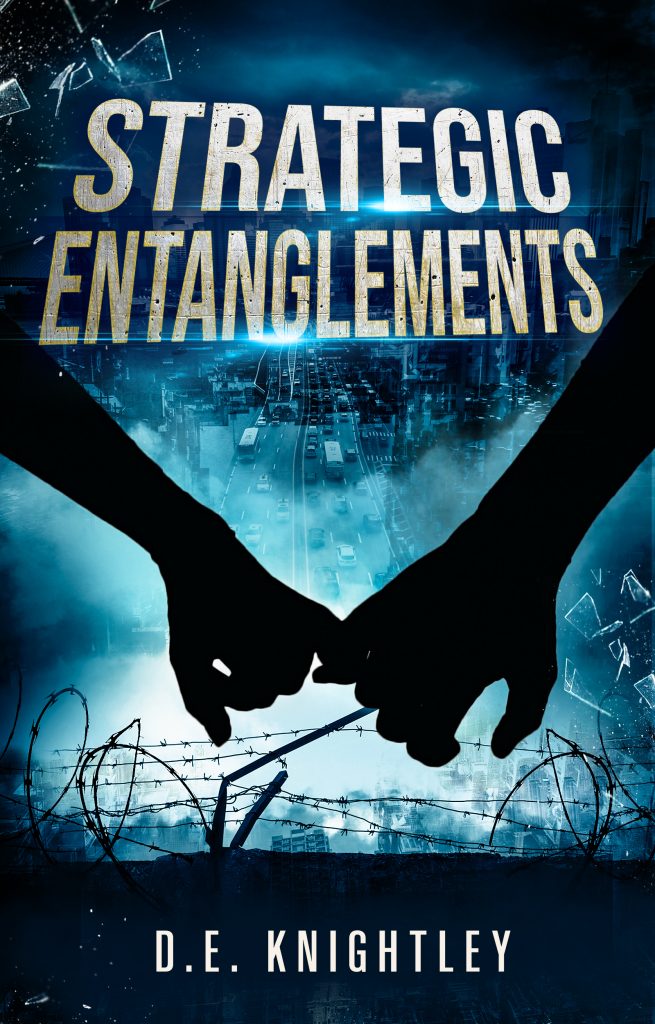 About Strategic Entanglements by D.E. Knightley

Want a racy thriller with an original plot, exquisite sexual tension, and a strong female lead that will keep you turning the pages late into the night? The folks at Readers’ Favorite gave it 5-star reviews! At the introductory price of 99c, what have you got to lose? Grab a copy now!
In a brutal and lonely world, how do you get
the human connection that you NEED
from the person that you CRAVE but cannot TRUST?
A deceiver like you. As ruthless as you.
The ENEMY.

On an alternative Earth called Terra, imperial Basur calls the shots, and everybody falls into line. Well, almost everybody…

Kendra Veiss is a young woman, but one to be reckoned with. She is as complicated as her life has always been. After a difficult childhood and a turbulent coming of age, she has found purpose in the ranks of the DSS, the Basuri secret service.

Times are complicated too. The rebellious, belligerent Askar were crushed by the Basur in a vicious internecine war nearly a century ago. They have picked themselves up off the ground and are making trouble again. Trouble that comes knocking on Kendra’s door. For one night, the unprecedented, the unthinkable happens. Kendra is abducted for interrogation by Askari intelligence from the streets of the Basuri capital.

She should be dead. But Kendra walks out of an Askari black site without a scratch on her. A modern-day miracle, some might say. Not Kendra. She knows her guardian angels are all too human.

Aran Reiner, for one. Six-foot-four-inches of arresting good looks and bad, bad news. He seemed determined to ensure her release. Now he is hanging around her like a hungry stray. What does Reiner want?

What Kendra wants is to surrender to temptation. But she thinks she can resist the lure of forbidden fruit. With all that bad blood between them, it should be simple.

Except that, in the murky world of espionage, nothing is simple. She should know that by now.

This racy, high-octane thriller grapples with fascinating dichotomies: inexorable attraction between enemies, the building of trust in an atmosphere of deceit, the showing of mercy in the course of ruthless pursuit of imperatives. It is the first installment in a thought-provoking series that explores human relationships in all their complex glory.

This Science Fiction Thriller Romance book is available in these Formats: eBook