You are here: Home / Free and Bargain Books / Bargain Books Under $3 / Featured Book: The Knight’s Falconess by Catherine E. Chapman 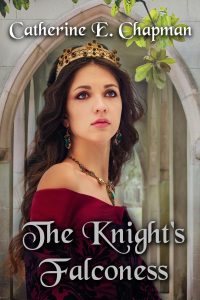 The South-West of England in the late Fourteenth Century. Zelda, daughter of a falconer in the service of Sir Hugh, suspects that the lord of the manor is attracted to her. At home, she is being pressed to accept the attentions of Matthew, an apprentice mason.
When Zelda’s ill-judged scheme to seduce Hugh goes disastrously wrong, she fears herself out of favour. But the incident leaves Hugh with the burgeoning sense that he has an alternative to his loveless engagement to the refined Lady Rosalind. He pursues his falconer’s daughter, not foreseeing the consequences of his actions.
Their dalliance becomes complicated by Zelda’s realisation that she is expecting Hugh’s child. The involvement of Hugh’s son Arthur and his companion, the young nobleman, Guy, only serves to muddle matters further.
Zelda’s ambition to become a falconess is eclipsed by her desire to be a mother to Hugh’s child. But the impetuous Rosalind has other ideas. Can Zelda escape the fate that the noblewoman plans for her? Will she ever truly possess her Knight?