You are here: Home / New Adult & College / First and Only by Allie Winters 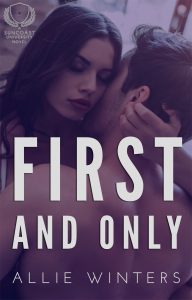 – Jake –
When my dreams of going pro are crushed by a career-ending knee injury, I have to figure out how to use brains over brawn for the first time to graduate college.
Enter Eden, my new Biology tutor. Except she doesn’t want to be paid in the usual way. She wants me to give her relationship tutoring to attract a guy she likes. But this shy, awkward brainiac is turning out to be so much more than I expected.
In the words of a scientist, will this equal exchange turn out to be more than the sum of its parts?

– Eden –
Hot guys don’t fall for nerds like me. It’s just a fact of life – one I’ve come to accept like gravity or thermodynamics. So even though others think Jake’s interested in me, I know it’s just this tutoring deal we have going on. I show him the electron transport system and he shows me how to kiss. Simple as that.
There’s no sense in getting my hopes up, even as I realize this ex-jock and I fit together in a way I never thought possible. Rarely does an equal exchange turn out to be more than the sum of its parts.
Even when I desperately want it to.

What Inspired You to Write Your Book?
The main character of this novel was a side character in my other books, and she was begging for her story to be told!

How Did You Come up With Your Characters?
I wanted to show how two people from very different groups and upbringings can come together and discover how well they fit together – despite preconceived notions of how they should be. Our past doesn't define us and everyone gets to choose their future.

Author Bio:
Allie lives in sunny Florida with her husband, daughter, and two cats. A librarian by day, she spends her nights writing happily ever afters. She enjoys reading, playing video games, and all things Disney.