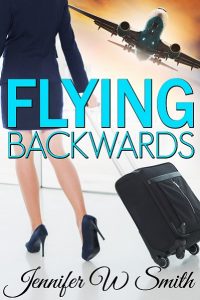 Would it be exciting to travel to exotic places, meet a man who makes your heart summersault, and become a person you admire? Eleanor (Nora) Clark realizes the key to an interesting life is eluding her. Never leaving the small Pennsylvania town she grew up in, living in a house her fiancé bought his ex-girlfriend, and spending weekends helping in the family business. She realizes life is passing her by as her twenty-ninth birthday looms on the horizon. Why hasn’t she taken any gutsy chances in life?

On a whim, she applies to become a flight attendant. Suddenly, she is jetting off to London, Rome, and St. Petersburg where she finds herself romantically entangled with three very different suitors. Eleanor’s new life exceeds all her wildest dreams.

To find fulfillment, Eleanor must discover success, confidence, friendship, and love. As her daydreams become reality, the choices she makes both build and break her heart. But her last choice decides it all.

How Did You Come up With Your Characters?
Eleanor (Nora) Clark, like me, comes from a small town and finds wild adventure and romance when she becomes a flight attendant. I wanted her to have three love interests be very different so I came up with a sweet veterinarian living in England, a hot-blooded hunk living in Italy, and added a likable Russian who could be more than a friend. Who would you chose for Nora?

Book Sample
Sergei reached for her hand and drew her to him. “What do you want, Nora? Are you interested?” His voice was deep, his accent heavy. He released her hand so he could place his on her hip. She did not pull away; Sergei took that as affirmation.

“I honestly don’t know what I want. I’m still trying to figure out my life,” she offered, feeling pathetic.

“We are all trying to do that, I think. I know what I want when it comes to you,” he said suggestively. He set down his bottle on the wooden railing and placed that hand on her other hip. He widened his legs, still braced against the railing, and then he gently guided Nora against him. Their bellies were practically touching.

His lips were too close to hers. Her hands came up to rest against his chest. Nora’s mind urged her to say, “We should just be friends,” but her hammering heart was insisting that response remain unsaid.

“What do you want, Sergei?” she teased, her voice breathy. Her body liked this tension.

At her words, his hands slid around to cup her behind, pressing her against him. His eyes blazed with passion, and his broad chest expanded with each quickening breath. Nora gripped his shoulders to steady herself. She looked into his blue eyes fringed with golden lashes. There was no question what he wanted. But did she want this? Her body wanted to be caressed and her skin tingled, but her mind was telling her something else. She should not lead him on if she was not sure. Sergei was a great guy, a good friend, attractive, but…

Sergei released his grip on her, and she immediately stepped back. Had he read something on her face? Had he felt her pull back slightly? He looked away and grabbed his beer bottle. He took a long swig and adjusted his pants. After a deep breath he looked at her. “I think we should go back inside.”

Author Bio:
Jennifer W. Smith is the author of the Landing in Love series. These contemporary small-town romances feature both sweet and sensual attractions. They always have something to do with aviation because this former flight attendant turned novelist has a flare for travel and adventure.

For adventure in a faraway land, check out her fantasy romances in the Broken Water series.

When not writing, Jennifer loves reading, talking to readers, and hanging out with her author friends. She lives in a quaint New England town with her husband and two children, along with their blue-eyed cat and rough collie.