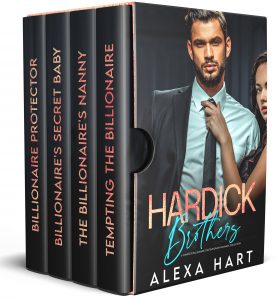 Craving an alpha billionaire that will melt your heart?
Look no further than Hardick Ranch and the four drop dead sexy, ungodly rich brothers who live there.
Their bulging bank accounts aren’t the only HUGE perk of settling down with a Hardick.
Protective, demanding, and always ready to please – this group of wild bad boys will light your e-reader on fire with passion that practically flies off the page!

Grab this steamy 4-book boxset and prepare to fall in love!

What does a girl like me know about mansions, fancy parties and rubbing elbows with Denver’s elite?

But I feel myself falling hard and fast.
And worst of all, my past is catching up to me quickly.
Should I keep running, or trust that I might actually be safe here… with him?

When you’re desperate for cash, you do things you never thought you would.
My desperation took me halfway across the country to become a nanny.
And instead of keeping things professional, I ended up in my new boss’ bed.

My new billionaire bosshole.
Mysterious. Controlling. Uptight. And most annoyingly…
The sexiest man I’ve ever seen.
My weakness.

And now, my darkest secret.

There are a billion reasons I should stay away from him.
But suddenly I can’t think of one.

My past isn’t pretty.
And after my wild B-Day celebration,
My future just took a sharp turn straight down the tubes.

One reason.
My new mandatory (and severe pain in the ass) business partner.

She has me pegged as an arrogant a-hole.
A rich party boy packing a fat wallet and a stiff rod.
She’s not completely wrong.

She can think what she wants as long as she hits the road.
Once I’m done with her,
She’ll be running for the hills in a week – max.

Then I slip up.

One night.
Hot… sweaty… throbbing… unbelievable…
And trust me, I’ve had my fair share.

I need this girl packed up and out of my sight – pronto.
More importantly, I need the images of her perfect body scrubbed from my memory.

One problem.
I might not want to run her out of town quite as much as I originally thought.

What Inspired You to Write Your Book?
I love writing down-to-earth heroes in romance books, but I also go weak in the knees for a swoon-worthy billionaire. The perfect combination was created when I wrote the Hardick Brothers Series. Rich, sexy, but in their hearts… they are all hardworking Colorado cowboys (they just happen to live in a castle-like mansion tucked away in the trees).

How Did You Come up With Your Characters?
I created Penn first – a loveable, pure-hearted, billionaire-heir who would give up all the money in a heartbeat for the love of his life. His brothers play a very important role in Penn's journey to love and it was only fair that each of them got their very own happily ever after.