You are here: Home / Cowboy / Her Viking Heart by Heidi Herman 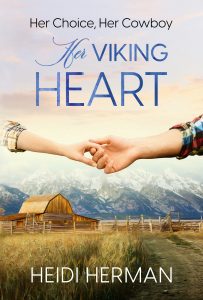 A modern-day cowboy-themed romance about the meaning of family, forgiveness, and finding your path.

When both her parents die within two years of each other, Anna Miller has no other family and dismal dating history. As she struggles to cope with the loss, she comes across a family secret that changes everything. Anna finds new purpose, determined to complete the research her father had started and begins a journey to unravel the family mystery. As she follows the clues, she opens herself up to love and a new sense of belonging, but is it real? The answer she searches for reveals her true heritage but might threaten her own chance at happiness and a new life.

What Inspired You to Write Your Book?
I love the modern cowboy genre but wanted to incorporate generations-old heritage as well. My character lives in the modern world but honors the philosophy and history of her Viking ancestors. The backstory was inspired by a real-life WWII-era romance I was told about but missing details led me to create my own spin on the details.

How Did You Come up With Your Characters?
Like many authors, some characters are inspired by real people, but most are a combination of traits and characteristics from many people mixed with a generous amount of imagination.

Book Sample
Anna nodded as she glanced at the man the cashier had called Logan.
What started out as a quick, unconscious glance suddenly held her fully
focused attention. She felt a physical reaction unlike anything she had ever
experienced before. For a second, it was hard to breathe and her mouth was
suddenly dry. It was an instant attraction, powerful and completely foreign to
Anna. The man was amazing. His presence radiated an aura of strength and
confidence. Taller and broader than most men she had known, he was not
awkward.

She watched as he walked the short distance across the entry,
moving with confident ease and fluid motion that was beautiful to see. He
leaned against the wall to wait. Thankfully, he was quickly engrossed in
reading a paper in his hand and didn’t catch her stare. Anna took advantage
of this and took her time looking him over. He was gorgeous by her standards,
strong jaw darkened by a five o’clock shadow, with the tough, weathered look
of a man who worked hard outdoors. This was no pretty boy Ken doll; this
was a real man. The epitome of a red-blooded American cowboy, or at least
her fantasy image of one.

“It’s on your account, Logan. Tell your Dad I said hi.” Anna heard the
girl’s voice and realized the cashier had returned with a wrap of dollar bills in
one hand and a takeout bag in the other.

The man stepped forward and took the bag the girl offered, murmuring
his thanks. As he started to turn, he paused and, for a moment, locked eyes
with Anna. She found herself staring into the deepest blue eyes she had ever
seen, like the brilliance of a blue jay’s wing.

He nodded at Anna and touched his hat. “Ma’am.” His voice was deep
with a slight drawl. She wished he would keep talking so she could hear more.
He walked toward the door, moving with self-assurance and a level of
masculinity she had never seen before. He seemed strong and capable,
comfortable with muscles gained as a result of daily physical labor, the
byproduct of hard work, Anna thought, the outdoor labor of a cowboy or a
rancher. He had a casual power she imagined had been acquired from a
demanding lifestyle, one where a typical day’s work involved riding a twelve hundred-
pound horse to rope and control a five-hundred-pound steer. The
earthy scent of the Wyoming dust clung to him, blending with the leather,
sweat, and smell of outdoors to create an intoxicating male aroma. Anna was
overwhelmed by him. The attraction was intense and instantaneous. Anna no
longer took notice of anything or anyone else in the room. Her breath caught
in her throat. The rugged masculine form held her full attention. She
continued to stand there, silent, as he turned and walked out the door.

A slight wave from behind the register broke her stupor. “I’ll ring you up,”
the girl said, hiding a grin.

Author Bio:
Heidi Herman was born and raised in Central Illinois, but her passion and a common theme in her writing is her Icelandic heritage. After two children's books, a collection of folklore based on Iceland’s mythology, and an Icelandic-American cookbook, she focused on her first love, women's fiction. Heidi published her debut novel, "Her Viking Heart", in 2018 and it was named the 2018 Foreward INDIES Book of the Year Gold Winner – Romance Category.

Heidi currently spends her time between South Dakota and Arizona, and in addition to writing, she loves cooking, photography, travel, and exploring the outdoors. She is working on a new series with cowboy themes.