You are here: Home / YA - Romance / If these stars could talk by Michelle Dykman 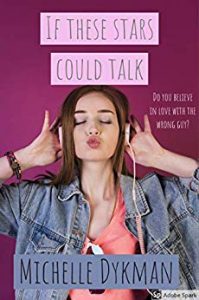 He thinks she’s shallow, she thinks he’s a nerd. What happens when they are forced to work together?

Willow Rysen is the ‘It’ girl at Bethel Private School, the one every girl wants to be and the girl every guy wishes he could have. Beautiful and popular she rules the school. She doesn’t care about college but needs a good grade in science to pass the course.

Christian Blythe is the boy who is overly enthusiastic about college. He feels high school is one more step to his dreams of greater things. When partnered with Willow his hopes of a great grade seem to fizzle faster than a piece of calcium carbonate in a bottle of hydrochloric acid.

When these two social opposites are forced to co-operate their ideas of each other quickly begin to change.

Will Willow see Christian for who he is or will the appeal of popularity be her downfall?

What Inspired You to Write Your Book?
I was inspired to write this book from years of teaching high school students and talking to them about their struggles and choices in life.

How Did You Come up With Your Characters?
My characters represent the two obvious factions in high school those that are accepted and those that are not. Both are represented here.

Author Bio:
Michelle is a busy working Mom who married her best friend many years ago and has two busy boys who always keep her on her toes. She is a Special Education teacher and loves to read and write books about romance, compassion and love. She was born in South Africa and currently lives in Canada. When she not writing you can find her running on the road or settled in with a good book.