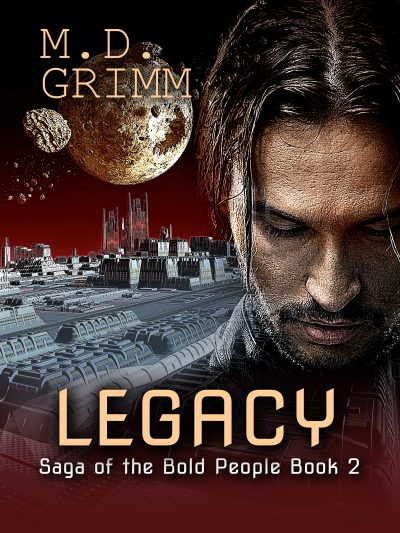 Legacy (Saga of the Bold People 2) by M.D. Grimm

To pursue his future, Leopold must first understand his past.

What does a former assassin do when he’s not out there… well… assassinating? Saving his species from extinction, of course.

At least, that’s what Leopold wants to do with every molecule in his body. But the task won’t be fast or easy, and he can’t do it alone. Enter Mastrodai—a mrrog prince who has absolutely no desire to rule, much to his father’s exasperation. He craves the ability to prove his worth as a mate and to somehow atone for his actions that led to Leopold’s torture at the hands of an enemy. Making humans official would be a good start.

But politics rule no matter what the species, and Mastrodai has to maneuver carefully and risk what he has built to give his mate what he deserves. And when he realizes both he and Leopold have deeper feelings for Alex, one of Mastrodai’s human slave women, he knows his future is out among the stars with his humans, not planet-bound with his kin.

Unfortunately, before they can set their plan into motion, Leopold receives a vision that sends him reeling and questioning everything he knows about himself. A vision he must investigate, back to where he began—Lex, the backwater planet where he spent his early years, and where he swore never to return.

Trigger Warning: Includes violence throughout, PTSD, a scene of graphic torture, and the start of a consensual menage relationship.

What Inspired You to Write Your Book?
"The Saga of the Bold People" started with one little scene that Leopold beamed into my brain one day. No joke, he seriously dropped it into my mind fully formed. From that one intriguing scene grew this monster. He feels like an old friend, one that regularly irks me and makes me laugh, or roll my eyes in exasperation.

The first story is about Leopold and his evolution from an assassin with emotional issues and a survivalist complex to a fully-rounded man who can love and laugh and find some joy in life. I didn’t set out to tell that story, it simply formed around that one scene. I couldn’t be happier with the result. Leopold needed to learn how to be human and that there was no shame in being one. It took an alien’s love and affection to show him who he could be.

One thing that won’t change is his need for a mission. A goal. Something to sink his teeth into. Before it was assassinating the elites of the InterGalactic community. Now it’s saving humans from extinction and gaining their freedom at the same time.

The entirety of the first book was him readjusting to his new reality and realizing that he liked it better than his former life. Once he realized how amazing it was to find love, to indulge in the company of someone he trusted implicitly, he realized that he wanted it for all his people. And the only reason he wanted it was because he finally spent time with his own people and realized he liked them.

How Did You Come up With Your Characters?
Leopold and Mastrodai came to me fully-formed. I honestly couldn't say that any one thing inspired me to write this saga. It was a multitude of other books and shows/movies that culminated into what you see before you. Each character serves a purpose. There will eventually be four main characters over the 6-book saga but of course, Leopold, the main guy will feature heavily since he started it all. He was the first domino that helped topple the rest.

The explosion thundered against my eardrums, cutting off my conversation with a large group of crop tenders. All of us flinched and I spun around as the boom thrummed through the air, and every mouth gaped, even mine, when the enormous fireball shot into the sky. Flaming debris rained down on the dry stalks, reaping chaos in seconds.

“Save what you can!” I said in Veruvian, the official intergalactic language. I ordered my bodyguards to split up and keep their eyes peeled. Then I sped toward the origin of the explosion, quickly outpacing Wekladai, my chief bodyguard. I lowered to all fours and raced into the danger zone, dodging and weaving around scalded metal and open flame. A growl sat contained in my chest, vibrating against my lungs. I bared my teeth, blood and death on my mind. Who would dare?

Smoky hot air burned my nostrils and irritated my throat. I narrowed my eyes in deference to the discomfort, shrugging it off. I’d felt worse. The mrrog academy and my rite of passage had beaten weakness out of me. Not to mention my father’s lessons. I reached the epicenter to find that nothing but rubble and blackened ground remained of the supply building in that quadrant of the moon. I recognized a couple of corpses in the mess as I picked my way through.

My growl finally loosened, and I resisted panting to save my throat and nose. I would personally slice apart the culprit. It could only be sabotage. A competitor, perhaps, angered that I’d received the contract from the InterGalactic Council instead of them.

I straightened and stared in disbelief. Was my security so lax as to allow an enemy to saunter right in? I walked over to the top of a shallow rise to stare out at the acres of crops set in quadrant EC-1. The fire was out of control all around me, the smoke and heat flaming my rage deeper.

Wind rose up and blew away much of the smoke. Movement caught my eye, and I looked down the incline. I froze, staring at the creature standing not far away, next to an old, unused shack. A strange land cruiser sat right next to him. It was a male; of that I was certain. And… could he be… a human?

Yes, he was a human. And a thief. Familiar rejlfei hung from his shoulders and arms, the straps straining against the weight. Did he merely come to steal from me?

Hair as black as the void covered most of his pale face, and brilliant blue eyes reflected the distant sun’s light, reminding me of stars. He was tall for a human, with broad shoulders, and a lean body clothed in a black bodysuit. His face was sharply angled, and yet everything was well-placed, coming together in harmonious union. His expression was stony, and his posture spoke of confidence and strength. The aeunn in his hand never wavered as he kept it aimed at me.

Standing before me was no cowed human afraid of his own shadow. No. He was a predator, one made of grace and purpose and a formidable persistence. Why he was on my moon I couldn’t say, but he wasn’t leaving it. He wasn’t getting away.

I crouched slowly, not wanting to startle him. One good leap and I would be on him. Even as the human must have guessed my intent, because his eyes abruptly shot wide, the wind blew again, hurling his scent into my face. I took a deep breath. His aroma was dense and organic with metallic and synthetic undertones along with a masculine musk that caused me to salivate. It made me think of thunderous nights when electricity charged the air, where passion danced between lovers, a wild and furious battle of wills and the need to dominate. It was violent and edgy, tense and defiant. Alive. Real.

My vengeful rage morphed into a sharp, all-consuming need, and it nearly knocked me on my ass. The wind brought his scent to me once more, and one word repeated again and again in my mind.

My body responded in a way it hadn’t in years. Not since Nandeely. Every lover after her had been an itch to scratch. But this human? I had to possess him. I had to claim him now, before he got away. Before another dared touch him. Images of what I’d do once he was under my control caused my cock to slip out of its sheath. I growled at myself. It had been a long while since such control was beyond me. And I needed it now more than ever.

“Mastrodai! What did you find?”

I startled at Wekladai’s voice as he joined me on the hill. Only then did I realize that the human was on his land cruiser and speeding away, clearly determined to escape.

“Come!” I charged after the human with Wekladai on my heels. My hesitation and the human’s distracting scent had cost me. I snarled and leapt, landing right where the human had once stood. I raced after him but it was no use. I wouldn’t catch him. Despite my speed, his cruiser was just too damn fast. He tore up more crops on his reckless ride, and I took another deep breath, focusing on his vibrant aroma instead of the smoke and burnt metal. Unfortunately, he was soon out of sight but I couldn’t stop running.

“Contact Jauntai!” I snarled at Wekladai. He stopped and I continued on. I followed the human’s trail, easily distinguishing his fragrance amid the acrid burning of the crops. It was a warmth in my blood, a song in my head. I couldn’t analyze the effect he had on me, not yet. I was hunting, and I needed to focus.

The fire swept across the land far too rapidly for me to compete with. The trail was gone in an instant, his scent taken away, only smoke and heat in its place. I stood and growled, frustrated and angry at myself.
Surprise had slowed my reactions and now my prey was gone. Prey that should not have found his way on my moon in the first place.

Unacceptable. All of it.

The obvious failure on all fronts burned my pride, and I dragged a hand over my hair. I turned around and huffed a deep breath at the wreckage. Duty first. Always duty first.

I will find you, human.

I hurried back, wary of becoming trapped by the flames. I resigned myself to an unpleasant call to my emperor. I met Wekladai on the way back, and from the look on his face, I rightly surmised the human had slipped through Jauntai’s fingers.

“Why did you hesitate?” Wekladai asked.

I growled. He wasn’t impressed. He was much older than me, about the age of my father, and had known me all my life. He used to be a compatriot with my father before I asked him to head my bodyguard team. He was the only one I allowed to be familiar with me. But right then I wanted to claw his face.

I turned away. “I must find him. Now. Immediately. Send probes. Look at the satellites and see if they caught anything. I want that blasted human!”

He blinked and tilted his head, ears straight and pointed forward. “Why do I sense more than anger in your urgency? Why do I smell your arousal?”

I spun around and gripped his throat, baring my teeth. He gripped my arm and bared his own, daring me to start something. Our claws slid out, and I was seconds away from brawling.

Wekladai growled and covered his teeth. I let go and stalked back to the spot I’d first seen him. It didn’t take me long to find an aeunn that was clearly not one of mine. I carefully picked it up, trying not to handle it too much. I sniffed it. Oh, yes, that was him.

Why hadn’t he shot me? He wouldn’t have missed.

“Jauntai is looking over the recordings now.”

I nodded. Without a word, I walked away, holding the aeunn delicately.