You are here: Home / Historical Romance / Lies of Gold by Jan Selbourne 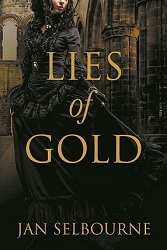 Silent, ruthless, protected by an unknown ally in Whitehall, he smuggles gold across the Channel to Bonaparte. When flimsy evidence points to the Essex coast, three men are given secret orders to find these traitors. One of those men, Julian Ashford, has his life transformed into debts and disgrace and sent back to Halton Hall, and Katherine the woman he loved and lost. What Julian discovers within the walls of his ancestral home is much deeper and more sinister than he thought possible, but nothing could prepare him for the betrayal when he finally faces the mastermind behind this sordid operation.

What Inspired You to Write Your Book?
Among the many stories of smuggling between England and France during the 17th, 18th and 19th centuries, I was surprised to learn gold crossed the Channel to support Napoleon Bonaparte's quest to dominate Europe. A story of traitors, blackmail and secrets was irresistible.

How Did You Come up With Your Characters?
A chance remark that 'we aren't the same person we were ten years ago' clicked for the characters I wanted for this story. Julian and Katherine were in their twenties when their illicit love affair ended in anger. Life was not kind to either of them and when they meet again, they are very different people.

Author Bio:
Jan Selbourne grew up in Melbourne, Australia. Her love of literature and history began as soon as she could read and hold a pen. Her career started in the dusty world of ledgers and accounting then a working holiday in the UK brought the history to life. Now retired, Jan can indulge her love of writing and travel. She has two adult children and lives near Maitland, New South Wales.