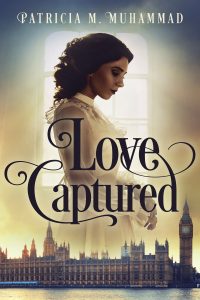 How Did You Come up With Your Characters?
I think I knew what her character and appearance would appear as before I even named her. I remember the character name Emma from a traditional romance author of yore (you can guess) and chose the name Emmeline for my own protagonist.

Book Sample
Emmeline was a determined and precarious young lady who possessed the wits of a merchant and the soul of a free-spirited butterfly. It was in the deep hollows of the night in the swampy outskirts of southern North Carolina. She concealed herself behind old burlap sacks of wheat, barley and cotton aligned like a garrison for storage during the off season. She was patient for years waiting for that moment, the one moment where she could summon the strength to leave the creature comforts of the mansion. Emmeline bided her time until she saw nearly all the candles blown out by all on the estate. She shivered and became discontent with her own hesitation to escape from the misery of plantation living she witnessed most of her life. The people of the manor tried to shelter her, so much so it was nearly impossible for her to leave the mansion. She always had to be escorted onto the grounds and watched over. They never allowed her to go beyond the confines of the estate, even as an adolescent. How she maneuvered herself from the manor and onto the grounds during this eerily dark and starry night was a secret she swore no one else could know. Emmeline slowly walked from behind the stacks and with fingerless cotton gloves, pressed her right ear towards the shack’s cool dampened wall. There was no sound, not even crickets chirping their mating calls. Servants had retired for the evening and slaves were incredulously exhausted from a day’s labour that no ordinary human could withstand. She adjusted her position where both knees met the dusty floor and leaned as close as she could and peered through the crack of the wall boards. She was alone; there was no one in the abandoned shack to confront her actions. No one to talk her out of her ploy and not a soul to encourage her.