You are here: Home / Erotica / Lustful Dreaming (Taming the Dragon Clan, Episode I) by Chelsea Falin 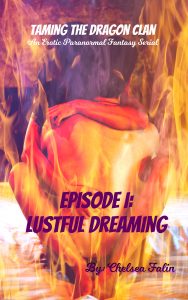 Zalena is hired by Damien to keep house, and she starts having weird, lustful dreams about her new employer. Azariel starts stirring up trouble… including asking out Zalena.

A mage tapping into the darker half of the earth element and leader of the Jewel Clan, he was never so much evil as lost. Of all the things Azariel is willing to do, harming a woman or child isn’t one of them. He makes a point to use his resources to eradicate the world of rapists, woman abusers, and child beaters one dead man at a time.

The last dragon shifter and leader of the Dragon Clan. He refuses to love, because love, he claims, is dangerous. He claims the sweet Zalena as the alpha male he is, partaking in carnal pleasures infused with pain that fade into soft care once his urges have been fulfilled.

A wolf shifter who despised the modern adaptation of his kind as ‘werewolves.’ With puppy-like enthusiasm and a good nature that lifts everyone’s spirits, Ezra has an animalistic personality in the bedroom infused with playfulness.

A mage who taps into the white half of the spirit element. He’s very ordinary compared to his brethren, but has a calming way about him that puts everyone at ease. He’s the voice of common sense in their trio, and when he’s gone on missions, the other two are known for making very bad decisions.

A tiny, raven-haired beauty who has clawed her way up in the world from a dark past we don’t quite understand yet. She’s unwittingly pulled into a world of magic, into the battle for balance in the world, when she accepts a cleaning position from Damien.

What Inspired You to Write Your Book?
I wanted to try something different. This book is both my first erotica title and the first I've written in serial form. I really loved writing it!

How Did You Come up With Your Characters?
My characters have always just appeared to me fully formed. It's been like that for all of my fiction books and this one was no different.

Author Bio:
Chelsea Falin is the independent author of more than 25 titles in the romance, young adult, and nonfiction genres. She began writing with intents to publish in 2006, and finally released her first book in 2009, at the age of 19. She has since released several standalone books and multiple series, which include "The Benson Family Chronicles," The Growing Roots Series," and "Think You Know Your States? Series." Additionally, Chelsea is a content marketing specialist and book blogger.

In her personal life, Chelsea is a mom of two who enjoys reading, writing, cooking, fishing, hiking, and spending time with her family.