You are here: Home / Romance / Lyrical Embrace by Amber Daulton 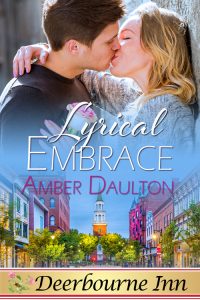 Out-of-work violinist Erica Timberly decides enough is enough. She leaves her abusive boyfriend and flees the big city, but then her car breaks down in the middle of the night. Though wary of men, she accepts help from Dylan Haynes, a stranger driving by on the road, and soon recognizes him as the sexy former drummer of her favorite indie rock band. Maybe, just maybe, her run of bad luck is finally turning around.
Music teacher Dylan Haynes knows Erica is in trouble, and her black eye is only the first clue. The stubborn yet vulnerable woman needs a friend, but he’s determined to give her everything she deserves.
Will Erica listen to the music in her heart and trust Dylan, or will her past always threaten her future?

What Inspired You to Write Your Book?
I love small town romances, especially ones with an edge and a little bit of danger weaved in. When plotting this story, I first pictured a young woman running away from the big city to escape her abusive boyfriend. I mostly write romantic suspense, so this idea worked.
I think a lot of readers can sympathize with such a situation, especially those who have experienced abuse and neglect from someone claiming to love them.
I also love stories about music and rock stars, but I don’t like the cheating and drugs that go along with the lifestyle. I haven’t published a story featuring a musician yet, so I figured I should get on the ball and do it.

How Did You Come up With Your Characters?
I love writing about real, flawed people.
My heroine, Erica, was in a bad relationship and finally found the courage to break free. Even though she found help, a new love, and a chance for a better future, the past was still looming over her.
My hero, Dylan, has retired from the New York music scene, and he now teaches kids how to play instruments. He’s gotten his life back together after all the drama of being a semi-star, and he and Erica have an instant connection.

Book Sample
Erica checked her watch. “It’s almost nine o’clock. What do you want to do now?”
“I have something in mind, but I’d like to surprise you.”
“Ooooh, interesting.” She braced her elbows on the table, weaving her fingers together, and braced her chin on her linked hands. “The movie theater in Montpelier?”
“Nah, it’s too late to go there tonight. The back-to-back movie marathons will have already started by now.”
“You’ve piqued my interest. C’mon, let’s go.” Erica handled the check, to Dylan’s irritation—she asked him to dinner, after all—but he took care of the tip.
After they left the tavern, Dylan pulled her close and circled his strong arms around her waist. Heat radiated from his body as he kissed her in the parking lot.
The shock of his lips on hers stilled Erica’s heart, but then the organ jump-started like an engine. Erica kissed back, desperate to taste him, and she savored the hint of spice on his tongue. She moaned and gripped the soft fabric of his shirt, almost ready to tear his clothes off.

Author Bio:
Amber Daulton is the author of the romantic-suspense series Arresting Onyx and several standalone novellas. Her books are published through The Wild Rose Press and Books to Go Now, and are available in ebook, print on demand, audio, and foreign language formats.
Amber lives in North Carolina with her husband and four demanding cats.