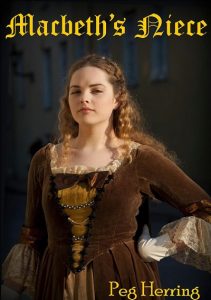 Tessa macFindlaech is sent to her uncle’s castle from her home in the Highlands, told she must learn the ways of noble folk and make herself useful to her uncle, Thane Macbeth. There she meets Jeffrey Brixton, an Englishman who irritates her and later abducts her. Their tumultuous relationship plays out as Macbeth claws his way to the throne of Scotland and then falls in tragic fashion.
Three hags predicted all of it. The same three told Tessa things about her own future that seem to be coming true. She travels to England–unwillingly. She marries but never becomes a wife. Does that mean that the third prediction must also come to pass, and she will find her only love among the dead?

What Inspired You to Write Your Book?
I was a world history and English educator for many years and loved teaching Shakespeare's play MACBETH. Tessa's story is more romantic than tragic, with a man and woman with conflicting loyalties, struggling to find love.
The sequel, DOUBLE TOIL AND TROUBLE, continues the story of Tessa and Jeffrey, who meet William of Normandy and live through the Norman Conquest.

How Did You Come up With Your Characters?
Macbeth was a real king of Scotland, though hardly the criminal Shakespeare made him out to be. In any prosperous household of the time there were liable to be nieces, cousins, and such who needed to be educated for some useful purpose. Once I imagined a lovely young niece who didn't really fit the mold of the day, a handsome English spy came along as a perfect means of getting her out of that mold and into a more adventurous life.

Book Sample
Rain fell, but that was not unusual in the Highlands, and the three creatures making their way over the hills paid no heed to the weather. What they did take note of was unclear, for they seemed to sense things that were not there, answering voices unheard and peering at sights unseen. They were an odd trio: women, to be sure, but less and more than the term implied. Their hair, once different colors and textures, had faded now to the same matted gray. Clothing hung in tatters, long unwashed and uncared-for. The three cunning, leering faces seemed at once knowing and unaware.
The tallest, who led the way, suddenly stopped and faced the other two, bony face alight with enthusiasm.
“Shall we tell?” she asked. “What say you both?”
“Tell!” said the second, and the third echoed, “Tell!”
“If it be ill?” The crone’s crooked finger pointed at them and her eyes narrowed.
“Tell!” the two repeated.
The smallest of the three, whose skin was gray with dirt and scaly from some vile disease, spoke. “They must make of it what they will. We are not to blame.”
“No, not to blame,” said the third, who lacked an eye, having only smooth skin over the spot where the right one should be. “They think themselves better, all of ’em. We shall tell and then see how it goes for them.”
With nods all around, the three again made their way across the hillside, sometimes taking a dancing step or two, sometimes speaking to the air, and, as they melted into the nearby woods, muttering words that pleased them but would make no sense to anyone else: “Double, double, toil and trouble…”

“The trouble with men,” said Lady Macbeth, biting off a thread with small, white teeth, “is they are too full of the milk of human kindness.” She smoothed the stitch just completed with a finger and looked at it critically before continuing, her otherwise perfect face puckered between the eyebrows as she judged her work. “Oh, a man is brave when his blood is up, and he can kill in battle well enough, but ask him to do a task requiring more than brute anger, and he will disappoint every time.”
She spoke to the group as a whole, but Tessa noticed that when her aunt looked up, the direct gaze of her gray eyes fell sharply on her. The others were related to the lady herself, but Tessa was blood kin to the most likely subject of the comment, Lord Macbeth. Frustration that the lady could not express to her husband was diverted to the niece who sat before her, who was unlikely to argue the point.
Five women sat in the warmest place in Inverness castle, the fireside, which in fact was not all that comfortable. The floor was cold, and Tessa’s feet felt as if they were slowly turning to stone. The smoke curled out of the fireplace and into the room. Scotland had no chimneys, so a small hole in the roof allowed the smoke to escape. Periodically, a puff of noxious gray belched into the room and curled round itself as it drifted slowly upward. If the inhabitants wanted heat, they had to put up with the odorous byproduct. Sitting near the fire was both pain and pleasure. Tessa’s fingers were stiff with chill, but her backside felt scorched by the blaze. She returned her gaze to her work, hiding rebellious eyes.
If she could move, do something she wanted to do, Tessa would not have felt the cold. However, she was being trained to behave as a lady should and therefore sat working on a tapestry under her aunt’s watchful eye. Like others of its kind, the tapestry chronicled an event of interest to family members: a hunt in which Macbeth and his friend Banquo had distinguished themselves in the quantity and variety of game provided for the castle’s use. Tessa was assigned a small piece of sky near the top while the others worked on the scene itself. The plain blue corner was simple enough that an amateur could hardly botch it, but the girl found the work tiresome and very slow, and her fingers hurt from a dozen pricks she had suffered so far.
Lady Macbeth shifted her stool away from the fire and rethreaded her needle. Her comely but haughty face twisted with the effort of seeing the needle’s loop in the gloom, and it took several tries to succeed. The other three women sewed diligently, showing no reaction to the harsh comment on men in general. It was always thus. The dour trio of attendants worked at whatever was at hand, hardly looking up and seldom speaking. In the two months she had been at Inverness, Tessa had heard no friendly word from any of them. In fact, it was a singularly silent household when only the women were there. This was because Gruoch, her aunt, inspired respect but not love, obedience but not warmth. Though she said all the right words and was never overtly cruel or even unkind, Lady Macbeth was a woman who bent others to her will with a lifted eyebrow or the tiniest shift of one shoulder. Whatever was offered or done was never enough, failure somehow implied.
Tessa considered her aunt’s statement, sensing it was aimed at the lord of the manor. Macbeth macFindlaech did not seem a timid man to Tessa. Before his twentieth birthday, he had taken up the sword in defense of his inheritance. A cousin had murdered Findlaech, the former laird, and briefly taken control of the small thanedom of Moray. Macbeth had gathered allies and regained his father’s territory, burning to death the cousin and fifty of his men in reprisal. Then he had married the widow of the rebel, the striking woman who now sat opposite Tessa in the hall of Inverness Castle. She seemed to have captured his heart with her gray eyes and her lush figure, though Tessa—and the others, from their demeanor—found her intimidating. No one dared contradict Gruoch around the fire as they sewed. Neither did anyone sing, gossip, or make merry comments. They simply worked on and on, like mindless drones.

Author Bio:
Peg Herring writes mostly mystery, and MACBETH'S NIECE was proclaimed by one editor to be "too adventurous to be a romance." Peg lives in Michigan with her husband of five decades and her ancient cat, but they're often on the road to visit interesting places, both in the U.S. and out.