You are here: Home / Buyer's Guides / Melissa on the Line by Ann Streetman 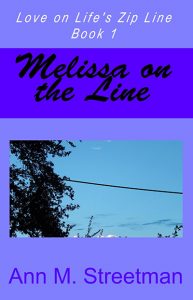 Melissa on the Line by Ann Streetman

Melissa is back in college focused on finishing her degree. Jason, a former Marine, introduces himself the first day of their statistics class. He’s facing a challenge that frightens him more than anything he experienced in the Marines.

Their love story exemplifies the analogy, “Love on life’s zip line is the messiest and most complicated experience of all, but it is oh so worth it.”

What Inspired You to Write Your Book?
I like the way my character John Donaldson expresses the inspiration for my Love on Life's Zip Line Books. He says, "I have come to understand that life is a zip line. The view below goes by too fast. It is sometimes beautiful, sometimes blurred, and always changing. The ride is exhilarating and scary. Love on life’s zip line is the messiest and most complicated experience of all, but it is oh so worth it.”

John Donaldson, the Baby Boomer who has gleaned valuable experience from his own ups and downs, is an important character in Books 1, 2, and 3.

How Did You Come up With Your Characters?
The series revolves around four generations of a Texas family and their friends. The main characters are at different stages in their lives in the books. John Donaldson is the father Melissa never knew until recently. With the financial help of her mysterious father, Melissa is back in college to finish her degree when she meets a former Marine she does not want to fall in love with. She just wants to get the degree, get a decent job, and lead a simple life. She doesn't need to get mired in the complications of her new former Marine friend Jason. He is facing a situation that frightens him more than any he had in the military.

Melissa's daughter Ashley, the millennial of the bunch, has a small role in Book 1. Patricia, Melissa mother and Ashley's grandmother is ever present in Books 1, 2, and 3.

I invite you to come along with Melissa as she struggles with Love on Life's Zip Line.

Book Sample
Melissa checked the room number again before going in. She was early, just as she had planned. She wanted to be there to scope things out before the room was full. She chose a seat in the third row which would allow her to see and hear the instructor. That seat would also let her get out the door pretty fast and on to her new part-time job. She didn’t want to be late on her first day.

Opening her royal blue backpack, she pulled out the statistics textbook, her yellow pad, and inexpensive ballpoint pen. She straightened up and leaned to the left to reach the cell in her jean pocket. She put it on silence/vibrate and placed it next to the notepad.

A tall good-looking guy came in and sat down in the second row just a little to her left. He looked like a non-traditional student which was code for older student, like her. He wore a yellow tee shirt that showcased his hard body. Definitely a hard-body military type. But Beaufort was crawling with them since the Parris Island Marine Corp Base was so close.

It was as if this one felt her checking him out. He turned to look at her. He said, “Ma’am,” nodding and smiling. “I hope you will understand this stuff a lot better than me.”

It was his turn to check her out. “Maybe we can study together sometime, Ma’am.”

Melissa said, “Not if you ever call me ‘Ma’am’ again. It makes me feel like an old lady.”

“You’re not an old lady by a long shot. I didn’t mean to imply anything like that. Forgiven?” He flashed a smile that exuded confidence.

He reached his muscled arm back with outstretched hand. “I’m Jason Davies. Just recently left active duty Marines. Trying to get into the groove of civilian life by getting back to college.”

Melissa took his hand. She said, “I’m Melissa Gregory. I’m getting back to college after a long interruption.”

“I got married and had a baby, but that was a long time ago. The baby is in her sophomore year of college in San Antonio.”

“Are you from Texas?”

“You’re a long way from Houston. That must be an interesting story.”

The instructor walked into the class and Jason, whispered, “Let’s talk later.”

Melissa liked Jason’s straight forward, no-bullshit manner. He was a little flirty, but definitely not overbearing. They might or might not talk to each other again. She looked around the room. It was at least good to sort of know another non-traditional student in this sea of young faces so recently graduated from high school.

The instructor said, “Good afternoon. I am Doug Jordan.” He turned and wrote his name on the board. With the last flourish of the “n,” the chalk scraped against the board, sending shivers up Melissa’s spine. Since she was in kindergarten she could not stand to hear chalk squealing against a board.

She shifted in her seat. She hoped the instructor was not a smart ass intentionally making that obnoxious sound. If he was, it was going to be a long hard semester in here.

When class was over Melissa hurried to the door. She looked back. Jason was watching her. He smiled and waved, and she returned his wave before walking out into the hall.

She checked her watch. Plenty of time to get to her job.

It was Jason’s last class of the day, and he was in no hurry. He picked up his khaki colored backpack and strolled across campus, watching young men and women walking arm in arm and gazing at each other. The last time he experienced that kind of devotion was high school, when he and Linda were in love forever, or so he had thought. How wrong he was.

That was water way under the bridge which had been re-examined enough. Linda had flat out jilted him, choosing someone else. And, hell, it hadn’t taken her long to decide the other guy was better than him. But, he had stopped fuming over that soon after he joined the Marines.

He had found a life that suited him perfectly. Serving his country wherever he was needed. Enjoying the comradery of his fellow Marines on and off the battlefield. Always sure they had each other’s backs.

He had enjoyed a few pleasant and comfortable relationships with wonderful women. He had taken care not to hurt them. He had been honest and clear with each one: there would be no promises made, so no promises would be broken. They had good enough sex and warm companionship. Usually the episodes ended with a change of assignment. He was needed somewhere else. No drama. The women always knew it was going to happen, just not when.

Leaving campus buildings behind, Jason walked four blocks to his one-bedroom apartment in a complex that looked amazingly like the barracks he’d lived in across the world. The nearby Marine base barracks design seemed to have crept over into this civilian project. Probably the reason he had chosen it.

He bypassed the elevators and walked up to the fourth floor. Nodding at a young man in the hall, he turned the key in his lock and let his backpack slip off his shoulders down to the floor at the end of a well-worn solid green couch.

He went into the bedroom. Stepping out of his khaki long pants, he grabbed a pair of brown shorts from his dresser drawer. He put them on and struggled out of his sticky sweaty shirt. He retrieved his phone from his pants pocket and slipped it into his shorts pocket and went back into the living/kitchen area.

When his cell rang, he brought it from his pocket and saw his mom’s smiling face.

Grabbing a beer from the fridge and sitting down on the couch in one smooth move, he said, “Hi, Mom. How are you?” He ran the cold bottle across his bare damp chest before taking a sip.

“That’s what I’m calling about. We saw the doctor today.”

“And, what did he say?” Jason, asked, taking another sip of his beer.

“There’s bad news, but some good news, too. The Alzheimer’s disease is worse, for sure. But, the doctor is putting him on a medication that may help. He said it helps some patients, but we just won’t know until we try it.”

“That does sound like good news. I appreciate your calling to let me know. Do you know how long it may take to see results from the new medication?”

“Let me know when there’s any news on that.”

“Of course, I will. Jase, how are you settling into civilian life? School and everything.”

Before answering, he took another sip of beer, enjoying the tingling cold against his tongue.

“Everything’s going to be all right,” he said, knowing he was pretty much lying. He didn’t expect to like civilian life. Duty to his family had forced him into it. As for school, he had made good enough grades in high school, but he didn’t like studying.

“I’ve met all my classes this week. They’re all probably going to be OK, except the one I just got out of is going to be a bitch.”

His mom laughed. “No son of mine is going to fail statistics. You’re not going to ruin my reputation as a math and science teacher now are you?”

“I’ll try not to, Mom. There’s a woman in my class who might help me. We might study together. She’s an older student, like me. We may stick together against all those young kids in the class. At least, I hope so.”

“Are you finding some new friends?”

“I know some guys at the base from way back. I’m going fishing with one of them soon. You must remember Terry. He and I served together in Afghanistan. He’s back here teaching now, and he has a boat. There are good fishing places around here if you have a boat.”

His mom said, “I remember you talking about Terry.” She sighed. “And, I remember when you and your dad used to go fishing when we lived in Indiana. Those were good times. The church was small enough to allow him time to do things with you. With both of us.”

“We did have some good times, Mom.”

“I miss doing things with your dad. We was always my best friend, not just my husband.”

“Now that you are out of the Marines, maybe you could settle down with a good woman.”

“I hear your father calling me, Jase, so I’ve got to go. Take good care of yourself. I love you.”

Jason wondered how long it would be until he had to give up school and everything else to help his mom. In his gut, he knew his freedom was on borrowed time.

His mind wandered to Melissa from statistics class. She had a lean attractive build with long dark hair and hazel eyes. Not really his type, but pleasant. Definitely worth pursuing as a study partner and friend.