You are here: Home / Historical Romance / My Cowboy Hero by Amanda Stuntz 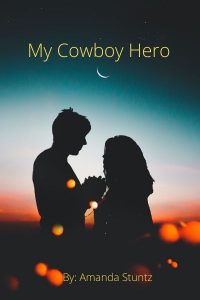 Kay was independent and strong-willed. She was convinced she didn’t need help from anyone, especially not a man. When she found herself about to lose the one thing she wanted most, Kay had no choice but to accept the help that was offered to her.

David wasn’t the kind of man who came to the rescue of a damsel in distress. But when Kay got herself into trouble, he couldn’t help but come to her aid. Now his feelings for this woman were clouding his judgment, and that could end up being deadly for them both.

What Inspired You to Write Your Book?
My inspiration for this book came from the difficult times I faced after my mother passed away.

How Did You Come up With Your Characters?
Both my female and male main character where pieced together from the personalities and characteristics of the people who were in my life at the time.

Author Bio:
Amanda grew up in Pennsylvania where her love for writing began. As a young adult she moved to Arkansas which is where she now lives with her husband and son. When she's not writing she loves to ride her horse.