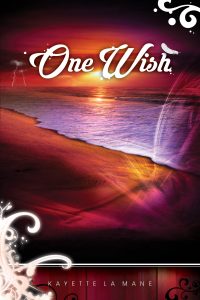 Book 1 in the Rising Sun Saga

Kira, a 21-year-old famous socialite in LA has everything she thought she always wanted, so what could she possibly wish for?
As Kira starts to wonder if there’s more meaning to life than what she can see, she doesn’t expect supernatural beings to start appearing. Firstly in her dreams at night, but then as strange weather storms start to roll in, as well as angels and not-so friendly-looking dark shadows, she suddenly wants to find out what’s real.

BJ, her handsome surfer friend who she’s falling in love with, seems to hold the key to this new mystery. But can this relationship be true love, or is there another reason why they’re destined to know each other?

‘Be absorbed and get lost in the romantic and supernatural world of this compelling series with thrilling supernatural occurrences interwoven in Kira’s night dreams and real life.
What would you wish for?’

What Inspired You to Write Your Book?
One Wish, the first book in the Rising Sun Saga, started from an idea when imagined a girl turning around and seeing the love of her life. But it actually turned out to be a dream the character was having, and although she knew this guy was real somehow, she just hadn’t met him yet. This became the first paragraph in chapter one.
The story went from there and was so alive that the bulk of it was then written in only a few months time! I’d started to piece all the scenes together into a sequence and saw early on that the story would fit well as being set across exactly one week. After writing the story into each day, the fun part was then figuring out what would happen each day so that the story would all tie together with a conclusion on Sunday.

How Did You Come up With Your Characters?
I first thought of Kira, the main character when I imagined a scene of her seeing the love of her life, but he was only in her dream at night. The idea for twins came when I first met a twin one day, and that sparked the idea for two main male characters in the story, particularly for books two and three in the series.
It was also fun to think of the names of each character. Some where changed a couple of times before they were decided upon. The main character, Kira’s name was changed a few times. Then a while after her name was written into the story, I came across a name meaning book and was surprised to see Kira’s name in there. The meaning given was to mean light, sun etc and knew that the name really fit perfectly and it confirmed this was her right name for the series. Benja (BJ) and Jaben (Abe) were decided on quite early on and didn’t change. And Alezmé came partly from Esme which means love.

As I walked back to Exquizit my mind was racing back and forwards over what had just happened. I was so distracted in thought, that it took me a few moments to realize that I had taken a wrong turn and was now going in the opposite direction.
I wanted to confront BJ. To demand an explanation about what had occurred in the café, the cell phones and his calm manner that seemingly resolved the situation, but what could I possibly ask him?

Author Bio:
Author Kayette la Mane comes from a creative background in the dance industry before being inspired to write her debut novel One Wish. This didn't come from having a dream as the main character so often has, but first seeing a picture of a dream that then became the first paragraph of this book. However, the ideas soon became too big that she realised they couldn't all fit in a single book, so the original story then became three books, creating the Rising Sun Saga.
She loves dancing, and appreciates the small things in life that can bring the greatest joy, like being snuggled up inside reading a favourite book inside it's pouring with rain outside.