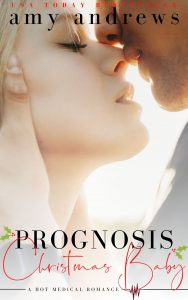 After years of heartache and unhappiness, Paediatric nurse, Maggie Green, is content with where she is in life. She’s made peace with the things that cannot be and moved on. She has good friends, a great place to live and a job she loves as an experienced and respected member of the nursing team on the intensive care unit at Brisbane’s Children’s Hospital.

The newest hot shot doc on the block, Nash Reece, has a reputation as a heartbreaker and a plan that doesn’t involve sticking around. He’s London-bound but that doesn’t mean he can’t indulge in some fun during his last three months in the country, right? Nash is a man who knows what he wants and what he wants is Maggie. His attraction to the only woman who hasn’t instantly fallen for his charms is surprisingly intense and getting more so now they’re working together on the PICU.

Unfortunately for Nash, Maggie also knows what she wants and even if it is the brash newcomer, Nash is ten years her junior and Maggie is done playing with boys. Her resistance is sorely tested however and soon both Maggie and Nash succumb to the potent pull between them.

And, when one night isn’t enough, they embark on a secret fling. Until Maggie discovers she’s pregnant…

With Christmas – the time for miracles – looming, all Maggie’s thwarted maternal yearnings resurface but how will Nash react to Maggie’s baby bombshell? And does Maggie have the courage to just stand by and watch him go to London when what she really wants is a happily ever after with her baby daddy?

What Inspired You to Write Your Book?
As a nurse, I have experience in the medical field. And what could be hotter than a brash, good looking doctor?

How Did You Come up With Your Characters?
They just pop into my head.

Author Bio:
Amy is an award-winning, USA Today best-selling, double RITA nominated, Aussie author who has written seventy plus contemporary romances in both the traditional and digital markets. Her books bring all the feels from sass, quirk and laughter to emotional grit and panty-melting heat.

At sixteen she met a guy she knew she was going to marry and several years later she did. They have two grown kids who have flown the coop for distant shores which enables their travel fetish.

She loves good books and great booze although she'll take mediocre booze if there's nothing else. For many, many years she was a registered nurse which means she knows things. Anatomical things. And she's not afraid to use them!

She's just taken a sea change and gets to create stories whilst overlooking the mighty Pacific Ocean.