You are here: Home / Gay Romance / Raife and Dexter Are Getting Married by MK Lee 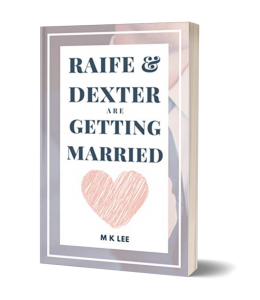 Raife and Dexter are one of those couples who make lonely people reach for a bucket of ice cream and watch Bridget Jones for the hundredth time. They also just happen to be getting married, in the most perfect of venues, surrounded by their closest family and friends. Life couldn’t be better for them. They have good careers, a beautiful house, and still make heart eyes at each other because they are so ridiculously, sappily in love. Doesn’t it make you sick?

They really do have it all. Except for when they don’t. Because even the most perfect of couples feel the pressure before getting married. And even Raife and Dexter have problems that are beyond their control. Join them as they face disaster upon disaster in the lead up to their wedding. Will you be rooting for Raife and Dexter to make it up the aisle?

What Inspired You to Write Your Book?
I wanted to play with the idea of a couple who are head-over-heels in love and unshakeable in that, who are about to get married and have a series of disasters or incidents that trip them up along the way to their wedding.

In media we often see couples get together and then have internal conflict within their relationship; I don't really enjoy that. I prefer to see a couple get together, be happy and supportive of one another, and then face external problems together and head on. Raife and Dexter are definitely that couple for me!

How Did You Come up With Your Characters?
These characters walked into my head and took root, I'm not sure I had much to do with creating them. But if I did, I thought about good-hearted people who are flawed like the rest of us. Raife has some of my interest in the subject he teaches and the outdoors. Dexter is the workaholic I wish I was who is incredibly passionate about his job. I think these two are ultimately parts of who I am, and who I could be.

Book Sample
Sixteen days. How have the days, weeks, and months flown by so fast that they are now down to only sixteen days? Raife studies the calendar stuck to the fridge, checking he doesn’t have his numbers wrong. He gets distracted by the wonky heart drawn on the small whiteboard to its side. Dexter always leaves Raife some doodle or message for Raife to see before he leaves for work, and Raife always looks forward to it. It is a gesture dating back to when they first moved in together some eleven years ago.

Raife then slides the screen open on his phone like the calendar on there might have different dates. Once again, his attention is stolen; by the new lock screen wallpaper he put there last night. It is a photo taken by Dexter’s dad Stan last week when along with Flora, Dexter’s mum, the four of them took a walk along the coast. Raife likes this photo because it captures a rare moment of Stan taking a picture that wasn’t just of plants. Even if he is sure the picture he’d meant to take was of the trees in the pub garden where they stopped in for dinner. Raife echoes the smiles captured on their faces, then checks the phone calendar, seeing the confirmation that yes; there are only sixteen days to go.

It is the morning for distractions. Raife finds the photo he’d snuck on Sunday morning of Dexter on his phone, sprawled across the bed with his face pressed into his pillow and his curls in every direction. The next photo is of Dexter too, wearing only his Cardiff Devils hockey jersey, pulling down the front of it for modesty and winking for Raife. He hadn’t really meant for him to only wear the jersey, but Raife smiles now for the memory of what came next.

The rest of the photos are far more suitable viewing for other people, not that he often lets anyone but Dexter near his phone. Raife scrolls through tempting cakes in bakery windows, cats minding their business on the windowsills of their homes, and plenty more snaps of cars either in need of a service or victims of terrible custom jobs. It is a habit long-established; whenever Raife sees anything remotely awful to do with cars, he takes a picture to send Dexter. Dexter keeps them in a folder to use as a screensaver at work.

Raife thumbs through two more cat pictures, then puts down his phone, needing to get ready for work. He leaves the kitchen ready to go upstairs, but then sees a pile of laundry on the dining table that they’d meant to take up last night. He thinks to take it up with him now, though knows further delays for letting his gaze fall on the thick cream scrapbook open on the other end of the table.

The book started life as an empty scrapbook gifted to them by Danica, Dexter’s sister. Rings, confetti, and all kinds of other trinkets adorn its front and pages. There are pressed flowers, fabric samples, and photos capturing everything from cake tasting to the gardens at The Manor. There are receipts, scribbled notes to one another, and so many other things that leave Raife smiling. Every turn of the page is a cherished memory in which to lose himself.

The earliest photo in the book distracts him from doing anything else. Mirth fills Dexter’s hazel eyes, in contrast to Raife’s own more serious-looking brown ones. Though they had both erupted into laughter, just seconds after Raife’s brother Charlie took the photo for the filthy comment he made to make them crack. Taken just after their engagement, this photo makes obvious their height difference. Raife always likes to say Dexter’s soft brown curls make him appear at least two inches taller than his own five feet ten. Raife’s dark brown hair is often wild-looking, yet even when standing on end in every direction, Dexter is still taller than him. Raife loves this photo, as euphoric now as he had when they posed for it. Even with a busy schedule ahead that includes a staff meeting and their last suit fitting, nothing could steal Raife’s happiness today.

Because in sixteen short days—and about six hours, if he’s being precise—Raife and Dexter are getting married. Raife marks the open page with his finger as he closes the book to see the cover, beaming at the Raife Anthony Fenton and Dexter Boone are getting married written there before turning back. He presses his palms against the open pages flat as a jolt of excitement sends flutters scattering in his stomach. How did his life end up as incredible as this?

Author Bio:
M K Lee is an author of poetry, short stories, and novels, who thinks the world deserves more happy stories. When not writing, they enjoy the company of all creatures great and small, love watching amateur dramatics, and discovering the world one good coffee and great cake at a time.