You are here: Home / Historical Romance / Rebecca and The Renegade by Michael J Schneider 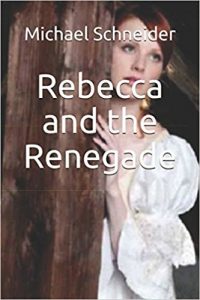 Can a young woman who’s seen her family slain by renegade Indians come to love one of them?
It’s 1781. While the Revolutionary War winds down east of the Allegheny Mountains, in western Pennsylvania, a tribe of Delaware Indians take to the warpath. A 19 year old girl, Rebecca Walker, witnesses the killing of her parents and brother by a raiding party and is captured herself. After unsuccessful escape attempts, she falls in love with a member of the tribe, Mamalachgook. She convinces him to run away with her; but further adventure awaits Rebecca.

What Inspired You to Write Your Book?
I once heard a Native American make a statement about white people claiming to be part Indian saying the ancestral relationship seemed to always be a white man and Indian woman. I thought it would be fun to reverse the roles.

How Did You Come up With Your Characters?
I did a lot of research on the Delaware tribes and the history of Western Pennsylvania.

Book Sample
Mamalachgook did not resist. Rebecca could feel his left hand move across her shoulder blade to the middle of her back. His right hand cradled her head gently. He pressed her to him until her breasts touched his chest. As Mamalachgook stroked her back with his hand, she tingled as the blood rushed through her body. The pleasure of Mamalachgook’s lips transformed her to a state of euphoria. Rebecca was aware of nothing else but Mamalachgook and the sweet sensation of pleasure, which pulsed through her. Hers was an experience like none she ever had felt before. Rebecca found her hands running up and down the hard muscles of Mamalachgook’s back. She instinctively felt that this man had the power to protect her – to keep her safe.

As desire swelled within her, a sense of shame suddenly gripped her. What was she doing? What was it she wanted to do? The strange arousal of her private most being shocked her. She pushed herself away from Mamalachgook, panting heavily.

“I, I … well it’s the first time I,” Rebecca tried to speak
.
She looked at Mamalachgook. He looked as though he were flushed, in spite of the bronze tone of his body. Strangely enough, Rebecca noticed he was panting. Did she have the same effect on him as he had on her? The thought that she might have such power over him filled her with pride. Mamalachgook now held her by the hands. Her fingers could feel his calloused palms.

“I liked that very much,” Mamalachgook spoke.

“As did I,” Rebecca confessed. Mamalachgook said nothing more. Instead he began to pull Rebecca toward him again. She began to float toward him, mesmerized by those dark native eyes. The feeling of shame took over this time. She pulled away.

“No, Mamalachgook, it’s not right,” she protested.

“To kiss each other, to be intimate as we just were,” Rebecca explained.

“My mother taught me it is not right to kiss a man unless I be betrothed to him.”

“What does this ‘betrothed’ mean?”
“It means that he has asked me to marry him and I have accepted. That we have entered an engagement period.” Rebecca explained.

“You are right. You are promised to another.” Mamalachgook answered, as he releases her hands and straightened up.

Still feeling the bliss of the past few moments, Rebecca blurted out: “But if I were to marry you…”

“What are you talking about? I cannot take you as a wife. I must take you to the sachem. Come, let’s go.” Mamalachgook responded gruffly taking Rebecca by the upper arm and shoving her in the direction of their destination.

Rebecca picked up her bundle and turned toward the trail. Mamalachgook’s sudden roughness convinced her – he wanted her. Intuitively, Rebecca felt her destiny lay with this man. As she walked along the trail she began to visualize what a life with Mamalachgook might entail. Could she marry him? How? Would it be an Indian ceremony or a proper church wedding? No, she couldn’t marry him. He was a heathen. Surely, God would not bless the union of a Christian and a nonbeliever.
Her thoughts then turned to what lay ahead. What would become of her if Mamalachgook delivered her to the sachem? Would he torture her until she submitted to him? Then what? Would she be forced to bear his children? Rebecca looked back at Mamalachgook. Right now, the view behind looked infinitely more desirable than what she envisioned ahead. The trail widened for a time and Mamalachgook came up abreast of her. Rebecca reached over and took his hand.

“You mean that I should take you as my wife?”

Mamalachgook responded. Rebecca could feel the palm of his hand began to sweat. She squeezed it to reassure him.

“Well we would have to have a proper period of engagement,” Rebecca continued.

Mamalachgook stared at her sternly but remained silent. Then he turned back and stared blankly down the trail as though wishing to ignore the words he’d just heard.

“Am I an unpleasant companion?” Rebecca probed.

“Because I must do my duty to my sachem, or I cannot return to my people.” Mamalachgook explained.

“We could go to Fort Pitt – just the two of us. After a proper engagement we could get married by a minister there.”

Rebecca, although uncertain whether she should really marry Mamalachgook, hoped she could convince him to abandon the journey they now undertook. She decided to use her feminine whiles to help convince Mamalachgook. Stopping, she tugged on his hand. When Mamalachgook turned to face her, Rebecca threw both her arms around his neck and pulled him to her kissing him hard on the lips. As Rebecca released her grip, Mamalachgook staggered back and nearly fell. Then he put one hand to his head in a thoughtful gesture.

“I suppose I could ask the sachem if I could take you for my wife,” he said.

“Would you?” Rebecca responded, then quickly kissed him again as though trying to seal that thought in his head.

“Alright, we shall return to the village.” Mamalachgook answered.

I was born and raised in Omaha, Nebraska. At the age of 18, I was eligible to be drafted as the Vietnam War was at its peak. I chose instead to enlist in the U.S. Marines. I spent 14 and 1/2 months in Vietnam with the 1st Reconnaissance Battalion, 1st Marine Division. Most of that time my duties were that of a clerk-typist; but I had a short period where I participated in long-range reconnaissance patrols.

In 1971 I enrolled at the University of Nebraska at Omaha and received a degree in Civil Engineering in May 1976. I worked for the Federal Government as an engineer from June 1976 until January 2008.

I got interested in writing and took two courses in writing for children and teenagers. My instructor assisted me in preparing Swift, Silent and Deadly: Recon Marines in Vietnam. This book is nonfiction targeted at the young adult audience.

My first book was The Secret of Sangre de Cristo, followed by Brendan of Kilrush. Both of these books were fictional stories intended for the young adult market. Both were self-published. I recently published The Secret of Sangre de Cristo as an eBook on Amazon Kindle. Ink Smith Publishing offered me a standard contract for Brendan of Kilrush. In July 2014 Ink Smith published the book in both paperback and ebook form. The ISBN for this book is 9781939156501.

After taking a short course entitled: Writing the Romance Novel at the University of Iowa, I decided to try writing a historical romance. The result was Rebecca and the Renegade.
I followed that with The Mystery of Skunk Hollow. This is a romance/mystery intended for an adult audience. It is available as an eBook on Amazon Kindle.

My next book was From Omaha to Da Nang. This is a nonfiction memoir of my two years in the U.S. Marine Corps. It is also available as an eBook on Amazon Kindle. I wrote it with the idea that high school seniors might like to know what to expect if they enlist in the Marine Corps.

Following From Omaha to Da Nang, I wrote When a Contractor Goofs or Why You Need a Construction Inspector. This is a nonfiction book targeted at the third to fifth grade audience.

My latest work is No Place like Halavo. This is a nonfiction story of an incident that occurred in the Solomon Islands in February 1943. This short book is also targeted at the third to fifth grade audience.