You are here: Home / Romance / Return to Aegos by May J. Panayi 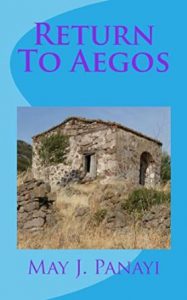 Return to Aegos is a continuing story of life on a Greek island, but can be read alone as well as part of a series. In this book, lots of the characters are coming back to the island, some finding family and rebuilding bonds, others finding love. All set against a backdrop of Greek island settings that will make you feel as if you are strolling in the Greek sun as you read. Magnificent scenery, great views, hospitable Greeks, boats, fabulous food, and of course, the cats. Life, the Greek way, goes on, against a backdrop of beauty and warmth.

What Inspired You to Write Your Book?
The characters cried out to me for their story to be continued. Sun Sea and Secrets was going to be a stand alone romance novel, but my characters continued to chatter in my head about how their lives were moving along, and how love was developing between them. I had to continue; it would have been rude not to. So we Return to Aegos.

How Did You Come up With Your Characters?
I only had to come up with a few new characters for this book. Most of them were already there, on the beautiful little Greek island. Of course that didn't stop some new ones joining them, and establishing themselves.

Book Sample
Ella thought about the last couple of months. She had gone back to England and put her flat on the market immediately. The estate agent had assured her that it would sell quickly. It was in a good area in the center of town, had great views and was nicely decorated and fitted out. Ella began to sell furniture and larger items that she would no longer need, on an internet site. The estate agent was right, the flat had sold quickly, and Ella sold her car too. Then she packed up all of her personal belongings, and clothes, as well as kitchenware she couldn't bear to part with, and put together a few crates full to send by container ship over to Greece. It would finally arrive at her father Adonis' house on the little island of Aegos, probably after she did, but she wasn't concerned about that. She had planned a detour, telling her father and her Uncle Panicos that she wanted to see Athens on her way back. They thought she just wanted to have a holiday and explore like a tourist, and although that was true, she did want to do those things, she also had an ulterior motive. Ella wanted to try and find out what had happened to Panicos' estranged wife and daughter. She didn't want to say anything, partly because she didn't want to get anyone's hopes up, in case she couldn't find anything at all, and partly because she did not want Panicos to forbid her from even beginning such a search. She could see in his eyes that he was heartbroken to have lost his daughter, possibly forever, and she knew the burden of guilt he carried from the past. Sighing lightly, Ella finished her coffee, and went back into the room to unpack. She was here for a couple of weeks and planned to see everything Athens had to offer as well as doing a bit of super sleuthing.

Author Bio:
My name is May J. Panayi and I’m 57. I have been a writer since I was a kid. Okay not anything earth shattering; just a poem in the local paper at age five, then a newsletter to the neighborhood age ten. I hobby wrote poems and short stories throughout my teens and early twenties, then various magazine submissions, and a lot of activity in the underground fanzine scene of the eighties; contributing to others as well as producing my own. I started writing books around 2000, and currently have fourteen titles published. I moved onto just writing fiction novels with the occasional short story collection. I became a full time self employed writer in 2014. It's been an interesting journey so far and one I hope will long continue. I write across a variety of genres, my friends call me the eclectic indie. My Sun series, in which there are two novels so far, a third coming this year to complete the trilogy, is my most popular style. It is travel romance/mystery; bit hard to categorize.