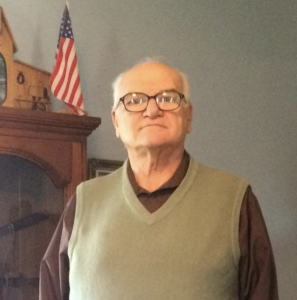 About Richard Skorupski:
After a 21 year career in the Navy, Richard returned home to his native state of New Jersey. He followed his passion for the open waters and started a second career in the marine parts business. The dense population of New Jersey and its high cost of living encouraged Richard and his wife, Cheryl, to find a peaceful, friendly environment for his second retirement. Richard and Cheryl, now happily reside in Spink County, South Dakota.
Richard reveals his love for South Dakota and appreciation of its people through his third career as an author of his six books centering around the fictional town of Helen, South Dakota. All his novels and stories tell the story of middle America and the rural lifestyle.

What inspires you to write?
The people in rural America have a particular way of looking at the world. They are the grandchildren and great-grandchildren of some of the more rugged pioneers ever to settle on the Northern Plains. These families have a history of surviving widely fluctuating grain and livestock prices, prairie fires, and the drought and depression of the "dirty thirties" dust bowl. They have a strong sense of family and respect for property.
I live amidst some of the most exceptional people in the world. Though I am a transplant from the eastern seaboard, I love telling the story of small-town America, both current and past.

Tell us about your writing process.
I jokingly tell people I listen to my imaginary friends and write what they tell me. That's not entirely true. I do not outline. I put my fingers on the keyboard and let them go where my imagination takes me. Many times I have pushed away from the keyboard and looked at my day's typing and said out loud, "I didn't know that was going to happen!"
Writing is fun for me. It is telling a story. I describe it as it comes into my head. If I had to go through all the mechanics of outlining a plot and charting all my characters, it would become work. I would most likely lose interest.
So, for me, I work best not being sure where a story will go. I let the characters take me on the journey.

I write mostly in the mornings. I am an early riser, My wife likes to sleep in. I get three to four hours each morning to myself. That is when I do most of my writing.
I try to write to the end of a thought. For instance, if a character is buying a car, I will write the whole car transaction as one thought. I won’t stop until the car leaves the lot with the new owner smiling.

How do you develop your characters?
I have a cast of characters that appear in every story in the Flyover County series. New stories need new main characters. Sometimes the story develops the character other times the character develops the story. That’s “seat of the pants” writing.
I would say my characters self-develop. They grow and become more coherent and distinct as I write about them. Their primary personalities do not change (a go-getter will always be a go-getter), but the underlying nature will come out as I write. (Why are they the way there are?).

Who are your favorite authors?
When I was young, it was all about science fiction. Robert Heinlein and Isaac Asimov were my favorites. Later in life, I tended toward action books by James Michener, Clive Cussler, and Dale Brown. I even did short side trip into fantasy with Hitchhiker's Guide by Douglas Adams.
Recently I am more into stories in my genre, Rural America and small towns. Debbie Macomber, Carol Cox, and Jillian Hart top my list. They are all wonderful storytellers. I can get lost in the worlds they create.