You are here: Home / Historical Romance / Seasons by Kat Samuels 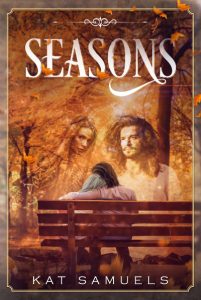 1967: At a hippie shindig at the height of the Summer of Love, May and Ethan discover that one person they’d always been hoping to find. The stars seem to have aligned to bring them to the start of a whole new life together–until a police raid separates them, leaving them alone and forlorn.

1997: Now in her early 50s, May is a widow and grandmother, but she’s never forgotten about that one night of passion and the man she left behind. For Ethan, now divorced with a grown son, he’s never quite moved past the woman he met for that one brief moment.

Two lonely strangers meet on a park bench, each convinced the past is just a dream. Now, they must find a way to heal themselves and rediscover the love and enduring passion fate once took away.

An unusual second chance, steamy seasoned romance with a guaranteed HEA, Seasons will take you into the longing, family drama, and intense love scenes of this reunited pair.

What Inspired You to Write Your Book?
In a conversation with another writer, she asked, "What if a couple met knowing a lot about each other but not knowing that this WAS the person they've been thinking about?" Her mind was going in a different direction with this prompt, but I started thinking about reasons the couple may not recognize each other and thought about the question of "Well, what if thirty years had passed?" I then mixed in the idea that they were both unintentionally dosed on LSD and a few other things when they first met, and that was the start.

The reason why I started it in the late 1960s is because I admire the social activism of that time period, and I've known some lovely people who emerged from it with their ideals intact.

I was not actually seasoned when I first wrote this novel, but I liked the idea even when I was younger that love and passion don't have to die with age. Now that I've actually passed the age of the characters (and finally reached a point where I reworked and published it), I enjoy that idea even more.

How Did You Come up With Your Characters?
I imagined two strangers meeting on a park bench, having no idea that this was the person they'd fallen in love with on one night thirty years ago. Then I started thinking about all that might have happened as the fallout of their first meeting and all the effects that those intervening years and life events in general would have had on them.

Mostly, though, the characters wrote themselves. I just had to follow along and listen when they told me who they were.