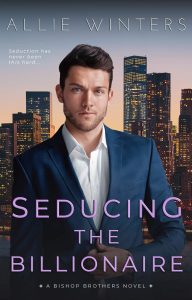 – Connor –
It’s all on me now. The billion-dollar company I just inherited from my late father. The public eye waiting for me to slip up. The pressure of keeping it all together.
At least there’s one bright spot in my life—my new assistant, Emma. My dream woman come to life if I didn’t know better.
It’s too bad the paparazzi would have a field day if they discovered something going on between us. I can’t afford for anything to jeopardize my new role as CEO of Bishop Industries.
Even if she is temptation personified.

– Emma –
It was supposed to be a simple assignment. Become Connor Bishop’s new assistant and convince him to buy my father’s company, Montague Media. So how do I do that? By any means necessary, according to my dad—including seduction. Otherwise, I lose everything.
But no one told me how hard it would be to seduce a billionaire who insists on acting like a perfect gentleman, especially when real feelings start to emerge. At what point do I stop the charade and tell him who I really am? Before or after I fall in love with him?

What Inspired You to Write Your Book?
As the third book in a series of interconnected standalones, fans wanted to know more about the youngest Bishop brother. So here's Connor's story in full!

How Did You Come up With Your Characters?
I had ideas about the two main characters in this book, Connor and Emma, since the first book in the series. I wish I could have introduced Emma earlier, but she needed to remain a secret for the big reveal!

Author Bio:
Allie Winters is the author of the Suncoast University series, the Bishop Brothers series, and the Lessons Learned series. She loves writing swoony, relatable romance and lives in sunny Florida with her husband, daughter, and two cats.