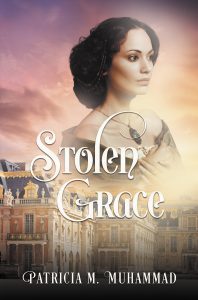 Penelope Moreau is a Creole courtier in 18th century Versailles, France. She searches frantically for a paper containing a clue as to who actually committed the royal theft. Once this is proven, the evidence would refute her brother’s, Armand’s, alleged complicity in the crime. Pierre LeMercier is also an aristocrat of the king’s court and is fascinated by Penelope’s beauty and intrigued by her feigned lack of interest in him. Penelope and Pierre’s courtship blossoms. Pierre vows, as well as Count Alexandre Montegeau a friend of Penelope and Armand’s parents, to exonerate Armand, restore the House of Moreau’s name. Pierre and Penelope hope to be wed when the matter is settled.

What Inspired You to Write Your Book?
I was heavily inspired by the culture and setting of 18th century France. Most of my books feature multi-racial lineages or couples, so it was easy for me to incorporate this aspect into the story.

How Did You Come up With Your Characters?
For this novel I searched for what were typical male and female names of 18th century France. As with my other historical romance novels, the female courtier begins as the center of the story. Penelope was so focused on clearing her brother's name that she found anyone who approached suspect or a distraction from her primarily goal. It is Pierre's insistence to be in her company and to help her in which the reader begins to know Penelope as who she was, a young woman who wished to be loved and cared for just like anyone else.

Book Sample
Penelope began searching frantically for an envelope she kept hidden in the desk drawer. She had kept a note for herself with a nobleman’s name and locale—a man who possessed vital information. She had to intercept any looming harm that could annihilate the Moreau name. Penelope believed that a live witness was more convincing than affidavits. She had not secured their identities but had an idea where to start her own investigation. It was her only chance to prove that her brother, Armand Moreau, was innocent of the crime. Some dastardly soul saw fit to steal the king’s favored jewel and rumours surfaced that her brother was in possession of it. Receipt of stolen goods or the actual thief of same, either way it was a tarnish, even more so since the victim was the actual ruler of this country which was still recuperating from the Seven Year’s War.

Penelope began her own research when one of the French maidens watched her write her name on a calling card and gave it to a local seamstress. She knew that she was being watched even in mundane activity. Her actions were not the foremost concern; however, it became clear that what her brother stood accused of affected her life more than she anticipated.