You are here: Home / Clean Romance / STORIES THAT INTRIGUE: Six Stories of Romance, Delight, and Mystery by Brenda Mohammed 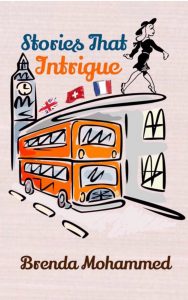 Follow the love story of Sam, an author from India, and Julia, an author from Trinidad in these six intriguing episodes in STORIES THAT INTRIGUE.
The binge and wanderlust of best-selling author Julia will delight every reader.
The author also included a section of remarkable poetry about her travels.
Lost in London
Julia, a best-selling author and her sister Stephanie visit London. While there, Sam, an author from India joins them to help Julia formulate a new book of stories. One sister disappears and causes panic in the hotel.
Drama in Switzerland
Julia and Stephanie find themselves stranded in Geneva when a cab driver they hired to take them from the airport to the hotel, robs them and abandons them in a lonely park. Who will rescue them?
Love Blooms in France
Stephanie goes off to University. While on a boat cruise Julia and Sam discover true love in France.
A Train Affair
Julia and Sam go to Paris by train to shop for wedding attire and meet a stranger. He relates a story to them which he wants them to tell the world.
The Lyon Connection
A fatal attack at the metro station uncovers many secrets, which upsets Stephanie.
New York Encounter
Julia meets many strangers at an Airport Lounge in New York and hears sad and funny stories. She returns to Trinidad. Will Sam join her in Trinidad to tie the knot?

What Inspired You to Write Your Book?
The writer in me could not resist penning a love story after my recent trip to New York, London, Switzerland, and France.
The places I visited were very romantic and they inspired me to write this story which has been divided into six episodes with suitable illustrations.

How Did You Come up With Your Characters?
My imagination and my experiences with people during my trip helped me to determine my characters. However, the main characters Julia and Sam are close to my heart. Julia is a little like me, and Sam, her boyfriend is exactly like one of my closest author friends who I met online.

Book Sample
Sam was waiting in the hotel lobby since 4.45 pm. He did not want to be late for his date with Julia to go on the boat cruise. He sat with his eyes on the elevator door so that he could see when Julia came.
At 5.00 pm Julia dressed in an olive green jumpsuit stepped out of the elevator. She was the picture of elegance. Olive green enhanced her olive complexion and the jumpsuit was figure hugging. Sam’s heart started racing. He was unaware that Julia’s heart was racing too when she saw him staring at her.
He jumped up as she walked towards him and said, “You look gorgeous.”
She smiled and replied, “Thanks. And you look handsome.”
Sam was thrilled to hear Julia say those words.
“Thank you. The cab will be here in five minutes. Sit next to me I want to tell you something.”
As soon as Julia sat down, the hotel clerk called out to Sam that the cab had arrived. Sam had to postpone telling Julia what he wanted to say.
They boarded the cab and he was suddenly lost for words. His right hand slowly moved to take Julia’s left hand. She didn’t object.
He felt the warmth of her hands and longed to take her in his arms.
Not yet, he thought. There will be plenty of time for that?
At the cruise port Sam showed his tickets on his phone app to the attendant and they were told to await the boat at the curb. The line was not long and soon they were allowed to board.
They chose a seat on the top deck so they could have a proper view of the sights.
The tour guide started pointing out famous buildings as soon as the boat pulled out from the dock. Julia was excited, but Sam appeared bored. He was dying to take Julia in his arms and shower her with his love.
“What’s the matter, Sam?” Julia asked.
“Nothing, I’m just a bit tired.”
“Didn’t you rest this afternoon after we came back from shopping?”
Sam lied. “Yes, I had a brief nap, but I’m still feeling sleepy.”
“If you want we can order our dinner now. We’ve seen all the famous sights and the boat is about to turn back now.”
“That’s a good idea. Besides, when the boat docks there will be a crowd ordering dinner. Let’s go down to the restaurant.”
They chose seats from where they could get a view as the boat sailed along the coastline. Julia ordered a fish dish and Sam ordered lobsters.
Sam kept fidgeting with his meal imagining how it would be if he kissed Julia.
Would she resist me or would she melt in my arms?
He wanted to tell her he loved her but instead blurted out, “Julia, someday I will cook you a lovely dinner.”
“Can you cook, Sam?” she asked.
“Sure, I can cook any dish especially prawns and squid.”
“Hmn, I love prawns and squid,” Julia replied.
They were both silent again while they finished dinner.
After dinner, they exited the boat and took a cab back to the hotel.
Sam gained the courage to say to Julia, “I have something for you, Julia. It’s in my room. Will you come with me to get it?”
Julia’s heart started racing. She had been imagining being alone with Sam for quite a while. Why do I have such strong and deep feelings for him? What will it be like if he kisses me? Would I be able to control myself?
When they entered the room Sam made no attempt to kiss Julia. He went to the closet and pulled out a small ring box that he opened. He knelt down on one knee and held Julia’s hand and said, “Julia, I am in love with you. Will you marry me?”
Julia was stunned. She stared at the large sparkling diamond ring in the small box and was speechless. Sam thought she was going to reject his proposal and his heart sank. Julia burst out laughing, “Yes, Sam I will. I love you too.”
It was a joyful moment. Sam stood up and placed the ring on her finger. He pulled her to him, his lips found hers, and she melted in his arms. Time stood still for the two lovers. They had found true love.

Author Bio:
Brenda Mohammed is a renowned, multi-genre, award-winning author, and poet from Trinidad in the Caribbean. She has written twenty-four books to date.
The former Bank Manager holds a Diploma in Banking from the Institute of Bankers in London.
Brenda also obtained a Diploma in Life Underwriting from the American College, USA and qualified for the Million Dollar Round Table, the Premier Association for Financial Professionals, six times in a row.
Brenda's writing career sparked after her near-death experience with Cancer and her recovery.
She wrote the book, I AM CANCER FREE which became a best seller.
That gave her the encouragement to continue writing.
Some of her books won multiple awards as follows.
1. I am Cancer Free – Readers Favorite award in category Health and Fitness 2018 and McGrath's first-place winner in Non-fiction 2016.
2. Zeeka Chronicles, Zeeka Chronicles was an award winner in the Category Young Adult Thriller in Readers Favorite International Awards 2018, winner in Science Fiction in SIBA Awards 2017, winner of the gold award in the category science fiction in Connections Emagazine Readers' Choice Awards 2018, and winner in the top ten finalists for science fiction in the Author Academy Global Awards 2018.
3 August 2019 – Stories People Love was winner of two gold medals in Connections EMagazine Readers’ Choice Awards. First place in Romance Category. And first place in all genres.
4. In same contest How to Write for Success won a gold medal in the category Non- Fiction.
5. My Life as a Banker – 2nd place Bio/memoirs in SIBA Awards.
Brenda is Founder of three Facebook Groups How to Write for Success, Poems for Suicide Prevention, and How to Write for Success Library.
Her work in Literature for Suicide Prevention is recognised worldwide. She was the driving force in the production of A SPARK OF HOPE: A Treasury of Poems for Saving Lives. The book topped the charts on Amazon and made Best Seller No.1 within the space of two days.
Brenda does not believe that the sky is the limit. She believes the mind is.

Links to Purchase eBooks
Link To Buy STORIES THAT INTRIGUE: Six Stories of Romance, Delight, and Mystery On Amazon