You are here: Home / Romance / Taming Beckett by G.K. Brady 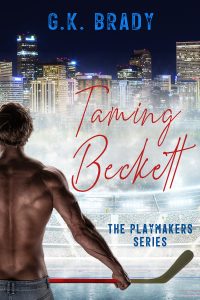 Beckett has everything. Until his bad habits wipe him out.

In his struggle for redemption, he falls for the only woman who wants nothing to do with him.

Paige is his last chance to survive. But will helping him mean losing herself?

Beckett becomes the sport’s pariah and braces for the fight of his life armed with only a yearning for another chance and one lifeline: Paige Anderson, the reluctant real estate agent Beckett coaxes to sell what’s left after the fallout.

Paige has a big heart and a husband with a secret but is in peril of losing both as she forges an unexpected bond with Beckett–a bond that bares the man concealed beneath the bad boy bluster.

If you love enemies-to-friends-to-lovers romances, you’ll enjoy this steamy read that twists its way to a happily-ever-after.

What Inspired You to Write Your Book?
The story's been running around in my mind forever. Though it's gone through different iterations and characters, the central plot line has always been about a man who lives large in the limelight and for whatever reason, it's taken away. How does he behave when his downfall happens? What kind of man does he become? Does he find redemption?

How Did You Come up With Your Characters?
I had an outline, a "sketch" if you will, of the characters as I began, but then they sort of took over and fleshed themselves out. Though they're most likely amalgams of people I've met or roles I've seen played, they took on their very own distinct personalities as the story unfolded.

Beckett woke with a head ringing like a metal goal post that’d just been struck by a screaming slap shot. His tongue was glued to the roof of his mouth. Where the hell was he? He lifted his head and scanned the murky shadows around him. His eyes caught on a dim, fuzzy light. Had he suffered a concussion? Had that damn Coyotes defenseman gotten him with a lights-out upper cut? No, this place was warm, and it smelled way better than the locker room.

He lay on his back in a bed. No covers. No pillow. No clothes.

Vaguely aware of another body, he fixed his eyes on that one spot of yellow suspended in gray gauze. When his vision sharpened, the hazy light revealed itself to be a table lamp with a yellow shade covered in pink polka dots. Miniature pink pom-poms fringed the bottom of the lampshade, and a small stuffed bear clung precariously to its top. A koala? His eyesight wasn’t that clear yet.

Gingerly, he rolled over and propped himself up on his elbows, running stiff fingers over his stubbled jaw. He glanced to his side. Long, dark hair. A large butterfly floated across her bare shoulder. A different tattoo—was it a ladybug?—popped into his dusky brain, along with a different part of her anatomy.

Must have been one hell of a night. His queasy stomach agreed.

He slithered to the bottom of the mattress and sat up, his feet landing on a cold floor. He shook his head, trying to scatter the cobwebs, and regretted it instantly. Where the hell were his clothes?

Standing, he staggered to a white dresser covered by a slab of glass that held a Visa card, a hundred-dollar bill, and a few broken lines of white powder. His credit card. His hundred-dollar bill. His coke. Well, he’d paid for it. He picked up the credit card and scraped the cocaine into one thin line, rolled the bill, and snorted it clean off the glass. Pinching each nostril in turn, he sniffed hard. A zing popped his eyes open. Now I’m awake. The few grains that hadn’t gone up his nose, he picked up on his finger and licked off. Not a speck left.

His dim gaze was pulled to a heap; he crouched on the floor and rummaged through it. My shirt. My jeans. Not my bra. He held up the bra and inspected it, searching his mind’s eye for the woman it belonged to. Dropping it back on the floor, he picked out the rest of his belongings from the tangle and padded to a door that opened into a closet. The next door led to a hallway. Let’s see what’s behind Door Number Three. That door led to what he was after—the bathroom. He folded his large frame into the tiny space, rearranging himself to close the door. He flipped on the light and was momentarily blinded by harsh fluorescence bouncing off cold white tile. The pounding in his head ratcheted up.

He shaded his eyes and sang under his breath. “Blinded by the light, wrecked up like a douche in the something, something night.”

He glimpsed himself in the mirror and flinched. Fuck, he looked like shit! Like the light, the reflection was harsh, though in an entirely different way. He tugged the pouches under his eyes. Blue swimming in red stared back at him. A lot of red. He blinked a few times and brushed white powder from one nostril. Surfer-blond hair, courtesy of what-was-her-name in Chicago who bleached it a few nights back, stuck out in tufts like a rooster’s tail. Shit if he still wasn’t used to it, but it had made her oh-so-happy, and she had made him oh-so-happy. He yanked his fingers through it, but it sprang back up with mattress-coil tenacity. He stuffed his face in a miniature sink, running cold water over his head, into his mouth. He brought his head up. No towels. Who the fuck has no towels in their bathroom? Even he had towels in his bathrooms—all seven of them. But not that girl out there—what the hell was her name anyway? Tracy? Stacy? Candy? Carrie? He smoothed his hair. Where had those creases on his face come from?

Contorting himself, he pulled on boxers, jeans, T-shirt, and button-down. Something stuck out of his collar, and he pulled out a black lace thong, promptly dropping it to the floor.

He huffed as he looked himself over in the mirror. Nothing had improved. He fished four ibuprofen from his front pocket and threw them back with a cupped handful of water. One helluva night.

Back in the girly bedroom, he stashed the credit card and the hundred and glanced over his shoulder at the brunette. What the hell’s her name? Man, she was out.

With a self-satisfied smirk, he left the room in search of the rest of his stuff. He was so bad with names. And how had he hooked up with her? He was bad with those details too.

His hunt took him to a futon, where he found his discarded shoes and socks. Memories came streaking back in flashes, like the crazy strobes from that dance floor where he’d shaken his tail trying to get some tail. No, wait. That was Chicago. Or was it Detroit? What city was he in now? Minneapolis? Shit.

Balanced on the edge of the futon, he pulled on a sock. He’d met this girl in a bar. Where else? A table of giggly women had asked for autographs. Pretty young women doing tequila shots. He’d given them his premium smile—the one that required sunglasses. After he’d signed whatever they’d shoved at him, they’d asked him to sit down. Consummate gentleman that he was, he’d accepted. Just Beckett and four very pretty, friendly girls who smelled really good and seemed to multiply as more joined their table. Screw team curfew, he’d thought; that bullshit was for the rookies, not him.

A couple of rounds later—on his dime, with extras thrown in so he could catch up, of course—he joined the ladies in toasting something. An engagement? A bachelorette party? Maybe the brunette was the bachelorette.

Whatever the occasion, the girls got friendlier as the alcohol did its job, and they asked for more autographs … in very interesting places. Sure, I can sign your T-shirt. Right over your heart. Unless you want to take it off. Where’s the Sharpie? Oh, you want an autograph across your belly button? The belly button ring will have to go, but I can take care of that. With my tongue. Oh yeah, I can do that. I’m sorry, where? Absolutely. I aim to please. But I’ll have to squeeze under the table.

Ah. That’s when he’d spotted the ladybug. And the black lace thong. Now his signature was next to the bug, like a brand, and the thong was lying on the bathroom floor. One helluva night. He’d thought a blond was going to join them, but she disappeared at the last minute. Disappointing, but he’d consoled himself with the brunette. He preferred them anyway.

Beckett searched for paper and pen to leave a note (“Hey, let’s do this again real soon” or “Do I get a wedding invitation?”) and found a tablet with a name across the top. Karen Gruber. He jotted a lame message that didn’t include his phone number. Those messages never did—no point in inviting someone to put the touch on him; he’d learned that lesson the hard way a long time ago.

As he hunted for someplace to put the note where she would find it, he patted his jeans pockets and mentally ticked off his possessions. Money clip, check. Money, check. Four condoms—he’d started with six, but he’d been ambitious, hopeful, both—check. Wallet, check. Phone … uh-oh.

Beckett crept back into the bedroom, his eyes drawn to the white rump on the bed. He found his phone on the nightstand and swapped it for the note, glimpsing the used condoms on a tissue. At least he hadn’t been so wasted he hadn’t used double protection—even he never got that wasted.

He was gathering up the tissue when a shapely bare leg called to him. An image of lines of cocaine on pert breasts floated through his brain. The breasts had jiggled delightfully. “You’re tickling me!” The cocaine was gone, but maybe he could make those tits wobble again. Practice wasn’t for another few hours, and he’d already blown curfew. It’d be a shame not to use the extra rubbers, and Coach was always on them about working out off the ice.

A picture of sassy dancing breasts in his head, Beckett laid his hand on her shoulder, covering the butterfly. She was surprisingly cold.

“Hey. Hey, sweetheart.” What the fuck was her name? Karen something. “Karen, sweetheart, I had a great time celebrating with you and your friends last night—especially since it led me here.” Smooth, Beck.

He shook her shoulder and rolled her over. Panic shot through him like liquid nitrogen.

Author Bio:
G.K. Brady was born in Japan and grew up in Vietnam and Singapore—and many would argue she has yet to grow up.

Since childhood, all sorts of stories and characters have lived in her imagination, elbowing one another for attention, so she’s finally giving them their voice on the written page.

A writer of contemporary romance, she loves telling tales of the less-than-perfect hero or heroine who transforms with each turn of a page.

G.K. is a real estate professional and the proud mom of three grown sons. When she’s not writing, she might be reading, traveling, drinking wine, listening to music, or gardening—sometimes all at once! She currently resides in Colorado with her very patient husband.