You are here: Home / Historical Romance / The House of Marchesi by Patricia M. Muhammad 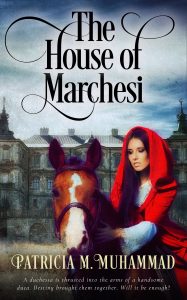 In 18th century Milan, a duchessa is thrusted from her horse and into the estate of another esteemed member of the king’s court. Lilliana is unable to remember her accident or her identity. Duca Emmanuele notices that Duchessa Rosetta is complacent about their daughter’s absence from the House of Montanari. She is unable to remember her accident or identity. Duca Alessandro cares for her. During the duchessa’s convalescence, she and the duca grow in affection towards one another. The maidservant, Noemi of the House of Montanari silently volunteers to help locate and retrieve the missing duchessa. Noemi enlists the help of her fellow maidservant, Gabriella. The Crown learns of a conspiracy of a member within the king’s court. Some of the ennobled are aware as well. The king and queen gather evidence and secure it in the royal vault. The duca and duchessa are determined to be with one another forever. Duca Emmanuele is right to be concerned for his daughter, for someone has conspired a dastardly plan against the duchessa, but who?

What Inspired You to Write Your Book?
I have always wished to visit Italy. Aside from its rich architecture and preserved waterways, I wanted to infuse a bit of humour in the next historical romance novel I would write. The romance between the duca and duchessa and sweet and evolves naturally despite the initial circumstance in which they meet. The humour from the other side adds the balance.

I also understood that as the story developed that the servants of the esteemed houses would have pivotal roles in ensuring that the duca and duchessa are safe, wed and are secure in the future they already knew they would have with one another.

How Did You Come up With Your Characters?
I understood how the characters would appear given their country's/city-state's history. As far as their personalities and quirks, I usually do not have a fix set of traits each character would have. I do not even know who all the characters will be added–the plot dictates their creation and usefulness within the story.

“Then I must serve the duca of this House and accompany him.”

“Slow and steady,” Lilliana said as she mounted her steed. The duchessa directed it to tarry alongside the inside of the courtyard, following the sounds of the group of men. She was only to stop at the gate, but her last kick signaled to the horse to leap from the estate. “No I did not mean–!” The horse continued to gallop. Its mane wisped in the air while its tail flailed in any direction. The duchessa held onto her chest with her right hand. Her long ebony hair flowed in wayward directions. She had never ridden in the main street on horseback. “Unseemly,” she whispered to herself. The horse ignored her as it followed the hoof sounds of those far ahead. “Slow, I commanded.” The stallion continued forward as if it were to reunite with a lost kin. The duchessa kicked it on both sides. “I do not wish to harm you, but—” It halted. The horse leaned itself backwards. It heard a 'click'. More weapons. It remembered the blasts but momentarily forgot about its delicate passenger. Up the duchessa went, flying in the air. She flipped haphazardly, trying to catch herself, but the initial thrust from her steed would not allow it. She braced herself for several injuries. Trees, orchards, and shrubs were all around. The trajectory steered Duchessa Lilliana towards a vast garden. 'Maybe I should tuck my head forward—no that will only cause for me to injure my neck,' she thought. Her body was still bent, almost in half but began to unfurl. If there were any spectators, they would not be able to note the angle. Her mantua was wide, covering half of her presence. It seemed as if she flipped for eras. One last time she saw the ground from up above and upside down. The ground was too close. The duchessa was to fall head first. Liliana's eyes widened. She flipped one last time. Quickly she shut her eyes again and relaxed her body. “Whatever is to—” Lilliana said. She fell. The duchessa opened her eyes. She was not dead. Lilliana was barely injured. She reached from her left arm with her right. “Not broken.” Her legs were still obscured by the massive gown and all the layers which supported it; but the lower half of her body was raised towards her torso. “I—I—”

“You have quite the tendency for unfortunate events.” Duchessa Lilliana heard a voice. It was that of a man. A gentleman she presumed. A handsome courtier stood over her. The duchessa was correct. “Do I dare give you advice mademoiselle, while you lay in this unfortunate state before me?” The duca crouched at her left side with his feet only two paces apart. He rested his forearms on his thighs with his hands clinging to one another. The duchessa swallowed.

She is currently working on her next novel.