You are here: Home / Historical Romance / THE LATE MR. CARY A 1920s Mystery by Michael Campeta 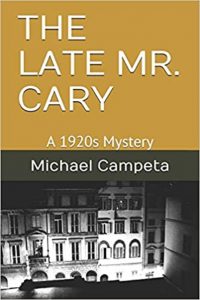 Of all times to travel to upstate New York, Megan Cary told herself as she hurried into Grand Central Station, it was at the height of a blizzard.
It is January 1928. Megan Cary, a young and stylish librarian, is on her way to the state library conference. On the train, Meg meets Janet Faraday who confides that she killed her son’s father six years earlier—and got away with it.
With her marriage crumbling, Meg can no longer tolerate her husband Adam’s moodiness and philandering. She harbored thoughts of divorce but murder?
During a family visit, Adam mysteriously dies. Meg finds a suicide note and the police want to quickly close the case. So does Adam’s mother Helen, the stern matriarch of the family. Skeptical that Adam would kill himself, Meg hires a private detective whose investigation ultimately unravels family secrets as a series of surprising deaths occur over two cold and snowy weeks in Albany.
Janet falls under a trolley and is killed. Yet a witness claims she saw someone push Janet to her death. Then comes the abrupt death of Helen’s maid. Soon after, a neighborhood busybody, who was present at the time of Adam’s death, falls down her cellar stairs and dies. Meg wonders if these deaths could somehow be related.
THE LATE MR. CARY is a suspenseful mystery set in the stately home of an upper crust family in the 1920s, bringing the 1920s to life—amidst a parade of death!

What Inspired You to Write Your Book?
I enjoy mysteries and romantic suspense fiction. I also like the era of 1920s and decided to set my book in that era. It is a fascinating period in American history.

How Did You Come up With Your Characters?
I am a librarian and my main character is also a librarian. The story is told through her point of view. And in keeping with the times, she is also a flapper!

Of all times to travel to upstate New York, Megan Cary told herself as she paid the taxi and hurried into the station, it had to be the height of a blizzard.
She thought she must be foolish to take this trip. Yesterday afternoon, as she finished work at the library and read the notices in the newspaper, the weather prognosis hadn’t seemed too bad. Accumulating snow, which already created havoc for the Midwest was slowly approaching the Northeast. By late afternoon, the winds were predicted up to forty miles an hour and winter storm watches were posted. The picture worsened by the hour, along with Meg’s mood.
She looked up at the departures board. Then she found the staircase to take her to the boarding platform for the four-forty train to Albany. She shivered at the chill wind, thinking how lonely train stations could feel. She heard an announcement that her train was pulling into the station after a ten-minute delay. Her husband Adam told her he would meet her at the station to say goodbye before she left. He was too busy at the pharmaceutical company and as he put it “just couldn’t take time off.” She looked at the crowd and could not see him. But then she finally spotted him. He came, after all, to see her off. She called his name, but he was swallowed up in a mad rush of people. She caught a glimpse of his back, retreating up the platform. At that moment, an announcement was made to board the train. Meg turned, walked down the platform, and turned once more hoping Adam might be there. She realized she was blocking other passengers from entering. Abruptly she turned and boarded quickly but then found she had to fight another crowd, only this time in the train itself. She saw an empty window seat. She put her suitcase on the rack above her head and then stretched out in the seat, filled with the mixed emotions of leaving home and her husband.
Megan Cary was on her way to Albany to attend the state library conference. Meg was employed as a librarian at the New York Public Library in Manhattan. She planned to stay with her in-laws who lived in Albany and looked forward to seeing her sister-in-law with whom she attended graduate school at New York University. Both she and Iris, Adam’s sister, were librarians. They planned to attend the convention. Meg enjoyed hearing about the state library where Iris worked, and they often talked shop about their diverse library endeavors.
She looked out the window at the darkness of the underground station, seeing her own reflection. At twenty-five, Meg had been told she was attractive. Although she knew she was not pretty, her golden hair was neat, her white skin and delicate features a source of gratification. She was sensibly dressed in a long skirt and a heavy fur coat to keep warm. She wore a light lipstick, some earrings, and a string of pearls. Overall, as she finished brushing her hair and replaced the brush in her purse, she was pleased with her appearance.
As if in a trance, she continued looking out the train window. The feelings she had experienced prior to boarding suddenly came back, quite strongly. It wasn’t the idea of leaving her husband Adam. She thought more than once of leaving him and even considered not returning to New York City after the convention ended. She thought of staying in Albany, making a new life for herself. But she knew she would never be free of Adam. And with her mother-in-law in Albany, that would be foolish.
She tried to shrug it off. It’d be good to get away for a while. She’d go shopping with Iris when she had spare time. Satisfied with her plans, she opened her pocketbook, not exactly sure what she was looking for. Lipstick, her wallet, aspirin, loose change, business cards. She looked through the cards, her hairdresser, a florist, Sloane Sheppard. She looked again at this last card.
Her mind raced back several years. She had met Sloane at the New York Public Library when he was there for research. She had helped him find information from the 1920 census for somebody or other, she couldn’t remember. He was a private investigator and a librarian, too. Didn’t she read how some wives had their husbands investigated if they suspected infidelity?
She saw the New York Times stuffed in the magazine holder in the seat ahead of her. The article on the front page made her look twice and shake her head in disbelief. Meg read about Ruth Snyder, a housewife from Queens who killed her husband and was put to death yesterday, January the twelfth, for her crime. She died in the electric chair in Sing- Sing Prison! She shivered as she looked at the photograph of Ruth Snyder strapped in the electric chair and the article underneath it. She wondered incredulously how a wife could kill her husband. Did that really happen? Apparently so, she mused and continued reading the Snyder article. Her reverie was broken by a conductor walking down the aisle and loudly announcing a weather-related delay. Meg sighed impatiently at another delay when suddenly another conductor approached and stopped at her seat.
“Is this seat taken?” he asked Meg and didn’t wait for a response before he said, “Here’s a seat, ma’am!”
So much for polite conductors, Meg thought. She looked up to see a woman hastily making her way down the aisle.
“Oh, thank you, thank you!” the woman called. She smiled at the conductor, and then sat down rather eagerly next to Meg.
She was hoping no one would sit next to her and that she’d be alone for the entire trip. But with the way the train was filling up Meg realized that was highly unlikely.
She then smiled despite herself as she looked at the woman next to her. She seemed

Author Bio:
Author Michael Campeta is a native of Albany, New York and completed a master's degree in Library and Information Science from the University at Albany. He is a librarian and teacher and enjoys reading, travel, architecture and history, especially the era of the 1920s. His novels are set in Albany during the jazz age of the1920s, a fascinating period in American history.

Links to Purchase eBooks
Link To Buy THE LATE MR. CARY A 1920s Mystery On Amazon