You are here: Home / Bargain Books Under $3 / The Necklace II – Back to Brighton, November 1962 by Linda S Rice 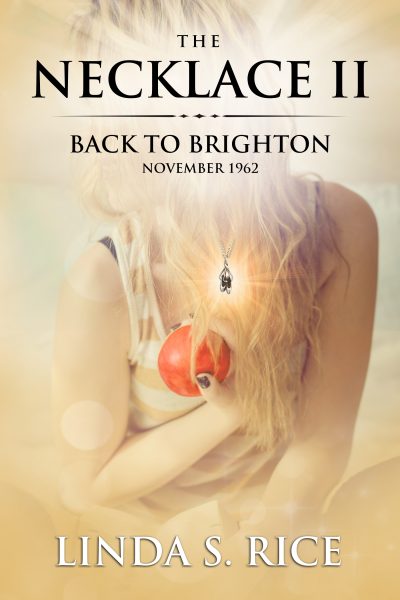 The Necklace II – Back to Brighton, November 1962 by Linda S Rice

This is book #2 of a 6-book time-travel romance series. Book #1 of the series (The Necklace – The Dusky Club, June 1962) is permanently free on Amazon.
It’s been five months since Susan and her best friend, Lynn, returned from their short journey to the past. While on a girl’s cruise, they’d met two ladies from Haiti, one who had “the sight.” She had instantly read into Susan’s soul, discovering an obsession Susan held within herself for a certain person for almost fifty years. To cure her of this obsession and make Susan realize that what she had in the present was far better than anything she would ever have had with James, she sent Susan back to the year 1962 to meet the real flesh and blood James.
The love affair that ensued between James and Susan was tempestuous and stormy. It wasn’t long before Susan realized that James wasn’t the perfection she’d made him out to be. As the seven day journey came to an end, she felt almost relieved to return to the present.
One impetuous action, however, was to throw a complication into what Susan was intended to learn from the trip. Although she came back fully understanding that her present life was near perfection compared to anything she could have had with James, something keeps tugging at her heart, something that won’t allow her to fully let go of her feelings for him.
In desperation, she contacts the ladies from Haiti, only to find out that the ballerina necklace she left in the past with James is serving as a link between them and that the only way to break it, will be to go back into the past again to retrieve it.
At midnight on a cold November evening, Susan is again transported back in time to November 1962, back to the Dusky Club, where James and the boys, who will one day become the most famous band of all time, are still engaged to play.
Will Susan be able to retrieve her necklace from the past and bring it back into the present? Will the link between her and James finally be broken?

What Inspired You to Write Your Book?
The inspiration for this book series came from friends after I jokingly mentioned how I'd love to travel back in time to meet a teenage crush I had back in the 1960s. As many of my friends all had the same teenage crush experience, they egged me on to write a time-travel romance that would make all our fantasies come true. The first book was actually intended to be the last, the moral of the story being that what you wish for often doesn't turn out to be better than what you already have. But, my readers fell in love with my two main characters, James and Susan, and asked for more. And, as James and Susan invaded my brain, I continued their love story with Susan desperately trying to stay in the past with James. As I typed, it almost seemed as if James and Susan had taken over and were writing their story for me.

How Did You Come up With Your Characters?
My main male character, James, is based on a real-life person who I will not name, but who developed into a fictional character and young man of his time (the early 1960s). As a talented musician, he is arrogant and self-centered. Being from a poor, working-class family, he has very specific ideas on how females should behave. He is bossy and controlling and his youth (at the beginning of the series) makes it difficult for him to control his emotions and temper. But he is also a man who is caring, honest, loves deeply and passionately and has an over-the-top sex drive…much to the surprise and delight of Susan.
Because I love feisty female characters, Susan developed into a challenge to James's chauvinistic personality causing them to constantly buck up against each other. Sparks constantly fly between them in their relationship as well as in the bedroom. Susan, being a liberated and fiercely independent woman from the future, is also stubborn, jumps to conclusions, and has an uncontrollable jealous streak making their relationship full of fire along with the passion.