You are here: Home / Women's Fiction / The Songbird Cottage by Sylvia Price 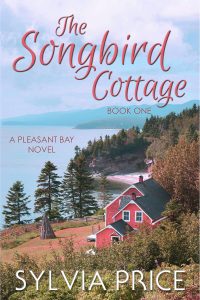 A feel-good read about family loyalties and second chances set on Canada’s picturesque Cape Breton Island, this book is perfect for those who enjoy sweet romances, countryside landscapes, and heartwarming endings.

Emma Copeland’s second marriage lasted only nine months. When Emma turned fifty, she rushed into a second marriage with smooth-talking Andrew Schönfeld. When he dies suddenly, Emma loses everything.

With her life in shambles, Emma turns to her first husband, Dr. John Havisham, the father of her two girls. John agrees to help Emma out by letting her stay in his cottage on Cape Breton Island.

As the beauty of Pleasant Bay and the peacefulness of Songbird Cottage begin to heal Emma, she gets more shocking news. Will she be able to piece her life back together?

Join Emma as she begins a new life on Cape Breton Island, and get to know her family and the friendly locals.

This is the first book in the Pleasant Bay series.

What Inspired You to Write Your Book?
I spent my teenage and young adult years in Nova Scotia, and I wanted to write a contemporary story that featured the beauty of Cape Breton Island. I've experienced a second chance romance myself, and I wanted that to be a major part of the story. I wanted the story to be a combination of getting to know the family as well as having some romance. I also wanted there to be a surprise ending!

How Did You Come up With Your Characters?
The main character is sort of a version of myself. I decided to give her daughters even though I have sons since I wanted to make the mother-daughter relationship a big part of the story. The love interest was someone I developed as I thought about the type of men who would live in a rural area of Nova Scotia.

Sylvia was inspired to write about the Amish as a result of the enduring legacy of Mennonite missionaries in her life. While living with them for three weeks, they got her a library card and encouraged her to start reading to cope with the loss of television and radio, Sylvia developed a new-found appreciation for books.

Although raised in the cosmopolitan city of Montréal, Sylvia spent her adolescent and young adult years in Nova Scotia, and the beautiful countryside landscapes and ocean views serve as the backdrop to her contemporary novels.

After meeting and falling in love with an American while living abroad, Sylvia now resides in the US. She spends her days writing, hoping to inspire the next generation to read more stories. When she’s not writing, Sylvia stays busy making sure her three young children are alive and well-fed.