You are here: Home / Mystery/Suspense / The Speakeasy Murders by Patricia M. Muhammad 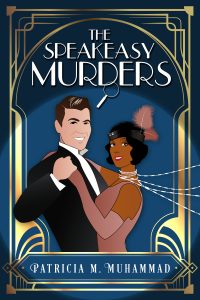 It is the roaring 1920s in the city of Chicago. Helen Williams is an astute, but bashful upper class coloured detective. Helen obtained her position through a recommendation from her father after delaying an opportunity to attend Fisk University. Her mother spoke against Helen accepting the job. Williams assumed it because at the time, a young, refined, coloured woman being a detective was ‘unladylike.’ Her go to instrument is an heirloom magnifier she inherited from her hard working and well educated grandfather. Though some of her co-workers take some time to become accustomed to her quirks, she is admired for her detail, accepted and often called upon her colleagues for her insight. Williams has only heard of one other female coloured detective whom she never met. Helen is called in one night to help investigate some peculiar murders in which a field is often used and she now believes is the criminal mastermind’s dumping ground. After a couple of days of discussing similar cases with her colleagues, Helen concludes that the executioner is a serial killer who also orders the killings. These activities stem from an underground nightclub. A group of criminals throw a brick into the station house to warn the officers to keep their investigations to crimes above ground. Lieutenant Henry Johnson orders the station on lockdown. After he lifts the lockdown, Johnson partners Williams with Patterson undercover to further investigate murders at the speakeasy. Stephen introduces Helen to his sister Ruby to help her undergo her transformation. Williams now appears as a flapper with her station house brother, Stephen accompanying her. She is surrounded by the unfamiliar, jazz music, alcoholic beverages, and the wildest dance crazes. Williams reminds herself to focus on the investigation. One night at the speakeasy, Helen is assaulted and nearly raped by a Negro male in one of the bigger rooms to the left of the main floor. His African male accomplice waits at the threshold of the room’s door to make sure the job is done. She was able to maneuver and defend herself until Stephen nearly pummels him. Thaddeus sees the African man run and trips him, upon impact his skull is split on nails of floorboards. Helen runs out. Thaddeus carries her away and brings her to his flat. She is shy and cautious. The Englishman is protective of her. They increase in natural affection towards one another. The Englishman proposes to Helen and she accepts. One night at the speakeasy, Helen discovers a secret stairwell. It would be the gateway which leads her to solve the murders. Helen and Thaddeus will finally have the peace they earned, and the life destined for them to have–with each other.

CONTENT WARNING: This book is a work of fiction. However, the author intended to create characters and settings historically accurate to the era it takes place in, the racially tumultuous 1920s. Certain terms used as racial descriptions now considered archaic, outdated or even offensive are used to reflect the past usage by both black and white Americans of that era. Particular themes regarding race, references to certain crimes such as murder and sexual assault are included as part of the fictional plot. The author provides this content description for any potential reader who may consider any of these subject matters or references too sensitive to consider.

What Inspired You to Write Your Book?
As far as genre, I wanted to try to write something different, beyond my familiarity. I actually enjoyed it and have already completed my second mystery/detective romance novel.

The setting of the 1920s, mainly how men and women typically dressed had a great impression upon me. Style and elegance was the norm and seem to adorn alot of well to do women, both black and white, naturally.

How Did You Come up With Your Characters?
I usually write from the protagonist perspective, which is mostly female. The setting guided me to the plot but I had to be true to who Helen was. The only female, let alone "coloured" aspiring detective in an office full of men, yet she was still sheltered from the racism that plagued the U.S. during the era. Shy, but intelligent, stern when necessary, but pleasant most of the time. Her office nor her colleagues did not define her. She was her own person regardless of how odd it may appear to be to others.

Book Sample
The roaring '20s. The federal government introduced Prohibition which most states readily adopted. However, this would not stop most. It became the gateway for the rise of the underground speakeasies. Known for offensive jazz music, the freedom of filling the night air with the stench of cheap cigarette smoke, and the setting of hardwood floors from one end to another; these were the places most knew of. These were the clubs that the decent would not speak of, lest they be accused and those who had no shame could not acknowledge openly because these establishments were illegal.
The hard heeled shoes of dancers, both men and women alike tapped, stomped, and glided across the surface of the dusty wooden floors. Some raised their hands as if to tell the winds of restrictions farewell. These people had their own way to entertain themselves. Drinks flowed. Gossip ensued. Strong legs kicked high and incessant chatter could be heard throughout. The shimmy of the shiny, scandalous dresses shocked any of the decent from the daily society. The flappers' stiffened hair bobs failed to have any motion either from the excessive use of hair spray or because they were nothing more than wigs. The band played jazz music and the blues throughout the night. The chandeliers bounced the sound of instruments and voices, keeping the scene lively until those present could not stand more. Segregation in the United States still found its way to affect nearly every aspect of anyone's life—even in the underground world. Negroes were to remain on their part of town and whites were to keep prosperous on theirs. Despite these racial politics, murder was the equalizer between the two races—so one may assume.
“Here's another one,” the police lieutenant said. He spoke as if he was lining his lunchbox with plastic wrap to keep as much mess inside as possible.
“The mob?” said another officer at the scene.
“What do you think, Helen?" She looked at the lifeless body, and walked around it, careful to search for any clues with her flashlight. The detective's footsteps crushed each blade of fresh grass as she passed it. She felt nothing unusual beneath her feet. “There is supposed to be at least one shell casing,” she said. Helen was the youngest rookie the Chicago police department had ever recruited—and she was coloured. Just graduated from secondary school, she considered attending Fisk University. She possessed a high aptitude for science and their father's neighbor encouraged her to apply to the department. “A mind like that could help solve a lot of these killings,” he would say. Of course, her race was not an issue because they investigated crimes on their side of town.

Author Bio:
Patricia M. Muhammad is an American fiction author of crossover contemporary romance/science fiction, science fiction/fantasy, mystery and historical romance genres. She has currently written 20 novels. She is currently working on her next book manuscript. Before penning fiction, Patricia emerged as an international legal history scholar and academic author, focusing on human rights, international law and restorative justice. She has currently written and published a combination of 22 research papers and academic book reviews in these subject areas. Her work has appeared in the American University International Law Review, Columbia Journal of Race and Law, the Willamette Journal of International Law and Public Policy as well as the New York History Journal. Her non-fiction writing has been cited dozens of times in various respectable academic journals.