You are here: Home / Historical Romance / The Woman Behind the Mirror by Jan Selbourne 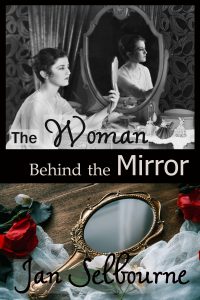 Marry in haste, repent at leisure is the last thing on Sarah Forsythe’s mind when she and the son of a local minister elope to the American colonies. She wasn’t to know abandonment, misery, poverty and shame would follow. As the colonies rebel against British rule and the siege of Boston worsens, alone and afraid, Sarah hides her desperation behind a hard shell. To survive, she is forced to steal from her employer. Instead of the cash she needs, she finds Bank of England documents. Sensing they might have some value, Sarah protects them through months of deprivation until she finally secures passage home to England. Unknown to her, two men are following, intent on claiming those documents. At any price.
Bank of England fraud investigator Neil McAlister faces the biggest challenge of his career when a woman from Boston demands a reward for returning lost documents to the bank. Then two men with the same name and nearly identical stories arrive in England, each claiming ownership of them. Who is lying? Or are all three accomplices in a plot to swindle the bank? As the obstinate, secretive woman gets under Neil’s skin, he trusts that she was an unwitting witness to the crime of cold-blooded betrayal and treason before the fall of Boston. Now it’s up to Neil to protect Sarah because the traitor wants her dead.

What Inspired You to Write Your Book?
It was an excerpt from official reports on the Siege of Boston that caught my attention. I'm Australian, and my knowledge of the American War of Independence was basic, however t was curious and delved deeper. The living conditions during the siege were appalling and I wondered how anyone survived to join the evacuation or remain behind for the Continental Army to take over Boston. I had the setting for a story.

How Did You Come up With Your Characters?
It was survival or perish during that siege, so Sarah, my female character had to be strong. She didn't start out strong but found enormous inner strength when her life hit rock bottom. I wanted Neil, my male character to be the very opposite, calm and assured in the rarefied air within the Bank of England, until his world is turned upside down.

Book Sample
A voice from behind made her jump. “Why aren’t you dancing?”
Sarah whirled around. “Because…” She didn’t know what to say.
“No one asked? I can barely believe it.”
Feeling stupid and awkward, she remained silent.
“Don’t tell me you can’t dance,” Neil taunted.
“Take care of your bank business and I’ll take care of my shortcomings,” she bit back.
“I can’t take care of my bank business if you won’t allow me to take the documents to London.” he said sharply.
“I told you I want a written assurance of a reward. I know and you know I will never see them again.”
Neil leaned closer. “I told you we can apply to the courts for a warrant to seize them.”
“You will seize a pile of ash.”
“You could go to prison,” Neil replied coldly.
“Really? I should have burned them in Boston to keep warm.” She shrugged. “I believe they are quite genuine, otherwise you wouldn’t be in such a fuss.”
“They must be examined properly. Forgeries are the bank’s biggest headache.”
“If they are genuine, the bank can hold them for Claude Westfield and give me an appropriate reward for bringing them safely to you.”
“You are not shy in demanding money,” Neil said caustically.
“No, I’m not. I rely on my brother for a roof over my head and it—” She broke off as her cheeks flushed. “Go and enjoy yourself and leave me alone.”
As she moved away Neil put his hand on her arm. “There is no need to be unpleasant. If they are genuine, we will discuss it further.”
“Nothing more to discuss,” Sarah’s eyes never left his. “Remove your hand.”
Neil’s face hardened. “You think you hold all the cards, madam, but rest assured, until you are more amenable, you’ll get nothing.”
“Neither will you, sir. Beneath your smooth bank exterior, you are no better than your forebears who loaned their gold at outrageous interest.”
Neil’s fingers dug into her arm. “You are no better than a street hawker yourself.”
“Get your hand off me,” Sarah’s voice rose as she wrenched her arm away. “Leave me alone!”
Neil’s expression changed from irritation to disbelief to shock. “Good God,” he breathed. “It was you.”
Sarah felt the blood drain from her face.
“I knew you were telling me a pack of lies,” he said quietly, “But there was something else I couldn’t put my finger on. For all my faults, I rarely forget voices or faces. It’s your voice. It was you inside Griffins clubrooms.”
He pointed to the small scar under his eye. “Your fingernails left me with a permanent reminder.”
“I don’t know what you are talking about,” she said stiffly.
“Oh yes you do. Not only quick with your fingernails and boots but very adept with a knife as well. I thanked the gods it wasn’t shoved into my innards.”
Fear lanced through her. “You are insulting and outrageous, sir. Is this the way you converse with other ladies of your acquaintance?”
“No, but don’t worry, I won’t say anything because no one would believe me,” he smiled slightly. “You look pale, let us sit down.”

Author Bio:
Jan Selbourne was born and educated in Melbourne, Australia and her love of literature and history began as soon as she learned to read and hold a pen. After graduating from a Melbourne Business College her career began in the dusty world of ledgers and accounting, working in Victoria, Queensland and the United Kingdom. On the point of retiring, she changed course to work as secretary of a large NSW historical society. Now retired Jan is enjoying her love of travelling and literature. She has two children, a stray live in cat and lives near Maitland, New South Wales.