You are here: Home / Clean Romance / Their Wonderful Solstice by Michelle Vongkaysone 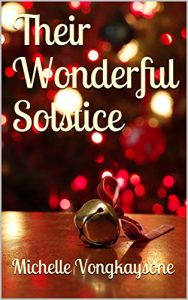 (This is the book’s description, as seen on its Amazon product page)

“When the holiday season hits, two wayward souls seek solace within it, as well as each other-“

Luke Tanner is tasked with arranging his office’s big “winter solstice” celebration. However, he falls to the countless demands of many, driving him mad. He seeks solace in silence, only to be denied it. Along the way, he meets another as he is, going to her for relief.

Kristen Harland is an upcoming writer who has returned home for the holidays. However, life within her family’s estate is one of cruelty, criticism and control. As she falls to her parents’ neglect and spite, she meets with Luke. As they ease into each other’s lives, she seeks the same solace he does.

Faced with their season’s troubles, will Luke and Kristen find solace within the winter solstice? Will their love overcome such torment, or will it shatter like so many past hopes and dreams?

What Inspired You to Write Your Book?
I was inspired by the many clean, inspirational romances I have read. I wanted to take their themes of understanding and restoration and put them in a story of my very own.

How Did You Come up With Your Characters?
I designed them initially with broad strokes, picturing the kind of people that would headline a "typical" romantic comedy, be it in book or movie form.

Once I did that, I went into their backstories and crafted experiences that would shape their personalities in the present. My characters are connected by their dysfunctional family lives that they want to heal from. They live in the present, but are still shaken by their pasts.

Author Bio:
My name is Michelle Vongkaysone. I am a native of Texas and a distinguished scholar of Amarillo College and West Texas A & M University. I've been a life-long advocate and enthusiast of the arts, but especially literature.

I've been told, by educators and peers alike, that I have a flair for writing. Whether they be scholarly essays, contemplation on life's nature or fictional drabbles, people have been enthralled by my works. As such, I have had various pieces published within academic compilations and the like.