You are here: Home / Historical Romance / Through Forests and Mountains by Margaret Walker 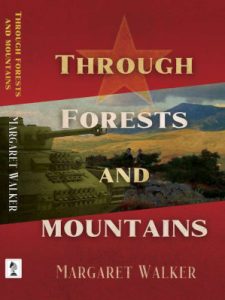 Yugoslavia 1941
The protagonist, Anton Marković, is a submarine captain in the Yugoslav navy, a reluctant loner who struggles with intimacy with women. When he is crippled in a propeller accident, he is prevented from joining his own boat, the Nebojša, in its dramatic escape attempt in the face of the invading German and Italian armies.
After nearly succumbing to septicaemia, Anton becomes involved with a Montenegrin partisan group that seeks support from a Partisan Republic that Tito has temporarily liberated from the Germans. Here Anton meets Mara, the headstrong daughter of the Yugoslav ambassador to Britain.
Mara is attracted to Tito because of the emphasis he has placed on the role of women in the struggle for National Liberation. However, with her breeding and education, she finds working with the peasants of Yugoslavia an uphill battle.
Mara is trying to lose her possessive ex-boyfriend, Miroslav Novak, a member of the Ustasha, the psychotic Croatian fascist party that Hitler and Mussolini have fostered to govern Croatia. As Mara’s friendship with Anton struggles for ascendancy amidst her reckless disregard for his feelings, Miroslav discovers that he can employ the same codes and decryption techniques used by Britain and Germany to pinpoint Mara’s location. He gets some help from Winston Churchill and Captain Bill Hudson, a British secret agent in Serbia.
As the Yugoslav Partisans are forced from place to place by the Germans, Miroslav finally finds Mara in Bosnia after a Partisan group led by Anton destroys the railway line from the bauxite mines near Mostar. A train is derailed and, during the operation, Mara disappears.
Plunged into despair by the thought of a world without her, Anton tracks Miroslav through the forest, interrupting his attempt to assault Mara. When Miroslav shoots Nikola, Anton kills him and escapes with Mara.
Anton asks Mara to marry him and she accepts.

What Inspired You to Write Your Book?
I was inspired to write the book following the story my mother told me about the women who fought alongside the men in World War 2 Yugoslavia. Jelena Batinić published Women and Yugoslav Partisans in 2015 (Cambridge Uni Press). It was a fabulous read and her stories of how men reacted to fighting with women got to work on my imagination. I needed a male lead who had trouble with women in his civilian life. How would he cope, I wondered, with the additional challenge of working with women as fighters? Naturally I decided that he had to fall in love with one.

How Did You Come up With Your Characters?
My characters commence as models of a person, or people, I know. In the course of writing the book, they take on their own personalities and, after that, they tell me what to do and how to write.

My male protagonist had to be a man who is more comfortable in the company of men than women. He needs the type of woman who is his intellectual equal, he just doesn't know it. Consequently, he goes through life picking the wrong sort of girl until here he is at 32, his past littered with ex-girlfriends, and still lonely.

The female lead had to compliment him and ultimately to benefit from the stability he gives her. I developed her as I wrote but she also has attributes of some of my relatives.

Book Sample
Though Mara had never considered, beforehand, the results of her actions on other people, she often regretted them, and her behaviour had not allowed her to develop any coping strategies when things didn’t go her way. She wondered miserably whether Anton might prefer to spend time with one of the nurses, who was, at this moment, enthusiastically prodding his most recently injured shoulder. Where did that leave her? Trapped by a possessive ex-boyfriend. Well, she had escaped Miroslav, or so she had thought, until that episode in Belgrade, and the next one in Užice.
She began to tremble, not wishing to be alone, when suddenly a figure sat down beside her and her arm was brushed by coarse wool, warm from the fire.
‘Hello!’ he said, wrapped in his blanket.
‘Anton! Are you all right?’
‘Now I am.’ He turned to face her, looking pleased with himself. ‘We blew up the bridge.’
‘Gosh! Well done!’
‘It fell with a mighty roar, boom! Right into the river!’
‘Gosh!’ she said again.
‘I thought you’d like to know.’
‘I would like to know. Thank you!’
They sat companionably without further talk until he asked, ‘Are you cold?’
‘I’m always cold.’
‘Would you like to share my blanket?’
‘Oh, sure! I mean, um, no. Don’t you need it, or something?’
‘I don’t mind sharing my blanket with you.’
‘But the nurses might get angry.’
‘Why?’
‘Um…’
She was shivering now and he could not fail to notice. He slung a corner of the blanket over her shoulder. Blankets being hard to divide equally, she discovered herself cosied up against one side of him, from his knee to his shoulder. He’s really warm and it’s so nice, she thought, I could stay here forever. Except that the awareness of life, separated by only warp and weft, troubled her somewhat. Naturally, he was breathing and she could feel that, too.
‘Better?’ he asked.
How should she answer this? If I agree, will he take it the wrong way but, if I disagree, will I have hurt his feelings? (Hurting his feelings hadn’t deterred her in the past.) He is asking me because, from his point of view, the closer he can get to a woman, the nicer for him. Or perhaps he is asking me because he is just being kind. I hadn’t thought of that before, but it’s funny how you can discover hidden depths when once you had assumed male motivation to be universally shallow. So… he is asking me if I feel better to prove that he’s not shallow. She chewed her lip. That’s endearing, but I am still not reassured that a sympathetic response from me won’t be interpreted as the new normal. He’ll expect it all the time. ‘Where is Mara?’ whenever he gets the blues. Oh, men are so plaintive! She shuffled away from him and experienced, not only the cold, but sadness. Away in the tree tops, a night bird crooned a lonesome song. Bugger, I’m picking up his vibrations. Maybe she should surrender herself to his blanket a little longer? But what if that gives him the wrong impression? I know what I’ll do! I’ll be politely grateful and then give all the other men equal attention. ‘Thanks for the blanket, Anton,’ I shall say, ‘your fifteen minutes is up.’
But instead she said, ‘Yes.’

Author Bio:
I'm a Special Education teacher. I have a Bachelor of Science degree from the University of Sydney, and diplomas in Education and Professional Communication. My short stories have been published in Australia and England.
I am a keen historian. I love research, and credit my lifelong fascination with the Balkans to my adoption and my birth mother from the former Yugoslavia. 'Through Forests and Mountains' is my second novel. My first novel, His Most Italian City, was published by Penmore Press in 2019.