You are here: Home / Historical Romance / To Fall For a Duke by Christmas by Sadie Bosque 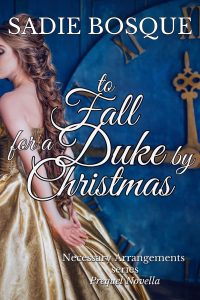 To spite his former love, David decides to court the least suitable miss of the house party, an enchanting Irish commoner Niamh. He will not marry a commoner, of course. It is just a pretense. Or it was. Until the sparks fly, and he finds himself falling hard and fast for a woman who is completely wrong for the role of his Duchess.

A penniless Irish commoner living among polite society is unlikely to find a suitor. Especially in England. Or at least that’s Niamh’s experience. Living in a troublesome household of her uncle, she is desperate to get away and go back to Ireland. When Niamh meets the Duke during the festivities, however, she finds herself at crossroads. Will she be willing to give up her freedom for a chance at love?

What Inspired You to Write Your Book?
It's a steamy holiday romance novella and a prequel to my upcoming series "Necessary Arrangements." I was inspired to do a christmas novella and decided to use the characters from my upcoming series to tease the readers. There's a bit of foreshadowing for a future series as well.

How Did You Come up With Your Characters?
As a prequel to my upcoming series most of the characters are from the main series. I had fun flashing them out and learning more about what made them the way they were in my upcoming works.

Lilies. Everywhere one looked, one could see the heaps of lilies. White flowers with pink dots on them, pure white, and with bright orange petals were swallowing up the place. They were Victoria’s favorite flowers. The smell of them, usually calming and pleasant, made David nauseous. Maybe it wasn’t the flowers, but the proceedings in front of him.
He was in the biggest church in London, yet it was filled with people to the brim. He knew that hundreds more were waiting outside. It seemed like every person in London was in attendance. Of course, it wasn’t every day that a Duke got married.

“Do you take this man to be thy wedded husband?” the clerk’s voice boomed in the silent church.

David abruptly swiveled his head and concentrated on the words coming out of the beautiful bride’s mouth. His heart pounded loudly in his chest. He could swear it would jump out any minute now, land on the floor, and be crushed by someone not careful enough to look where they were stepping.

“I do,” he heard Victoria’s voice. A sound he deemed the most beautiful in the world, now crushed his heart right out of his chest. No jumping out, no stepping on it was necessary. Just those devastating two words that forever made her someone else’s wife.
David heard nothing beyond those words. He watched, half in a daze, as the bride and groom exchanged the rings. The groom kissed his bride solemnly on her cheek, and they left the church, followed by a throng of guests.

David stood behind, exiting at the last possible moment. He couldn’t, in good conscience, stand there, shaking the groom’s hand and offering his felicitations and wishes of a long and happy life with the woman he loved.
David had no idea why he came to the ceremony in the first place. Perhaps he didn’t believe that she would go through with it in the end. Something in his soul hoped, wished fervently, that she wouldn’t be able to say those words, she wouldn’t be able to vow her love and devotion to another man, in a church no less, after all those blissfully happy months they’ve spent together. After all the promises and ‘I love you’s’.

Or perhaps he just needed to see it with his own eyes. He needed the confirmation that indeed, his Victoria would never really be his. From this moment on, she was the Duchess of Rutland.
He stood there on top of the stairs as the crowd dispersed and the open carriage carried the bride and groom away from the church, onto their honeymoon, and out of his life.

Author Bio:
A steamy historical romance author from outskirts of the World. Sadie writes romance, hoping to create the perfect escape for people like her. Extremely introverted, the author was born in a sheltered family and found her solace and love and passion in books.