You are here: Home / Paranormal Romance / Unfinished – In This Life and The Next by Carol Martindale-Taylor 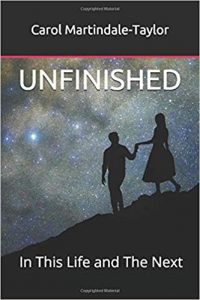 When the author was 21 years old in 1964, her first love was killed in a car crash while coming to see her when he originally planned to celebrate his own 21st birthday with friends on board the USS Mahan stationed in Long Beach, California. For the following five decades, her survivor’s guilt chose the men in her life, three men perceived to be in need of saving, but then everything changed in 2013 when she wrote a short story about her lost love. Not only did unhealed wounds surface, so did a visitor from the Other Side.

By that time she had been a paranormal investigator for seven years, and one with a reputation as a ‘debunker’ for their team. Then her cell phone rang two different times while it was turned off, convincing her that maybe, just maybe, their clients were not the only ones with unseen loved ones around them. Through late 2018, numerous incidents occurred—including both of their names being called out and recorded during two investigations—confirming her lost love was not so lost after all.

What Inspired You to Write Your Book?
After the successful publication of a few magazine articles, and years of a nagging desire to write a short story about my first love being killed in a car crash, I created a manuscript that not only opened unhealed wounds, but brought about an epiphany. I realized I had just spent 50 years of my life devoted to satisfying my survivor's guilt; that the three key men later in my life were chosen because I perceived they needed saving. That was only half of the story however–the remainder centered around numerous visits from my lost love, some of which were recorded during our paranormal team's investigations. I hope by writing this memoir, I help those dealing with survivor's guilt, and perhaps open up minds to the possibility that the Other Side may really exist.

How Did You Come up With Your Characters?
These are real-life characters, and I tried to be true to who they were at the time and to the relationships we shared.

Easing down on the twin mattress, the cold sheet sucked the breath out of me. With no other option for my cold feet, I snuggled down in a pile of blankets and waited for my own body heat to bring relief. Rolling onto my left side, I tugged the bundled mass up under my chin.
The blankets bunched up over my right hip pushed down against me, the sensation snaking across my lower back to my left hip.
What the…oh, oh. Dave?
It was early 2014, and as a Lead Investigator in a paranormal team, I still struggled with my belief that such phenomena happened to others, but would never happen to me. That was just one of many mistakes I made over the years.
When Dave, my first real love, died in 1964, I understood it to be permanent. I went on to marry, graduate from college, travel—all things one does in life, but with one caveat. I unknowingly kept my survivor's guilt well satisfied for the next five decades.
Saving other men became a quest, explaining my life-long choice in partners. If they were emotionally and financially secure, I was not interested in them beyond friendship. It was not until I re-read my short story about losing Dave that unhealed wounds surfaced and my epiphany roared overhead.
Damn it, that's what I've done! I didn't save him, so I found other men to save.
Well, I can't blame him for what happened. I did that myself, but at least now I know why—and he knows how I love it when he tucks me in at night.
Fifty years in the making, ours is a story of love and healing coming from the Other Side.
***

Author Bio:
Born in Chicago and raised in Norwalk, Iowa, Carol Martindale-Taylor moved to San Diego after high school graduation in 1961, and subsequently lived in Arkansas, New Mexico and Maryland, landing in Costa Rica in 2018. Entering college late in life, she completed a BA in anthropology from the University of New Mexico at age 49, and at age 55, an MS in criminal justice from the University of Baltimore.

Along with a love for writing, her other interests and activities include archaeology, prison reform, Mexican wolf reintroduction and paranormal investigating, with the paranormal taking her straight back to writing. After publishing several magazine articles, she wrote her first book, "Unfinished – In This Life and The Next." This memoir explores how a tragedy at 21 years old set the stage for five decades of survivor's guilt choosing the men in her life, and how reopened wounds in 2013 brought about contact and healing from the Other Side. She currently works on a fictional story about a Gypsy/Rom couple in 1898 Romania, and plans to create a trilogy following their children.