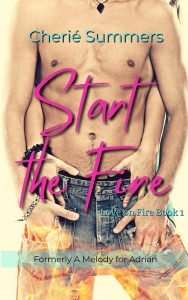 Adrian “Bolt” Hall doesn’t give a shit about anything…except music. His dream…rock stardom. In 1981, he is on his way. He has the look, the attitude, and a band that kicks ass. The last thing he needs is a distraction. And that’s just what Melody is. He falls in lust the moment he sees her wiggle her ass across the school parking lot. From then on, he’ll stop at nothing to make Melody his, even if she can’t stand the sight of him.
Melody Stewart grew up in a life of privilege with wealthy parents who packed her off to boarding school. As she returns to public school for her senior year, the only thing on her mind is fitting in. She isn’t trying to attract anyone’s attention, especially that of an angry punk rocker intent on taking her virginity—someone who plans to use her, then discard her as he has done countless others. Melody is determined to fight Bolt’s advances even if it means denying her own fascination with the spike haired, rock star wannabe.

Adrian and Melody…will they stop fighting long enough to fall in love?