You are here: Home / Archives for Anna St. Claire 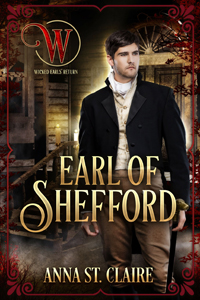 Colin, Earl of Shefford visits a building he won, having determined its address to be an excellent location for a new club. Discovering not only a fully functioning orphanage but a beautiful headmistress, who refuses his offer of an alternative establishment, he suffers a pique of temper. Irritated by her immunity to his charms, he foolishly succumbs to his intense attraction and brashly offers her a choice. Either she must accept him in a marriage of convenience or provide proof that the orphanage has value to him.

Impoverished and needing to restore her fortunes, Miss Honoria Mason despises the members of the ton for their extravagance and blames them for her family’s loss of home and fortune. Nora’s life takes a turn when the handsome Lord Shefford becomes the orphanage’s landlord. Either she proves the orphanage’s worth to him in two weeks or becomes his convenient bride in order that he may produce an heir. She refuses to lose the orphanage she has worked so hard to preserve and so accepts his offer to marry.

Sparks fly as proximity forces them together, the better to know each other. Yet, how may romance overcome such hazardous beginnings when resentment has stacked the dice against them?

What Inspired You to Write Your Book?
As part of the Wicked Earls Club, this was a third opportunity to continue that fabulous series. I had already built a group of characters (and especially, the Earl of Bergen — who has been part of all three books!) So, I wanted to continue it and give Shefford his story, having introduced him in the Earl of Bergen book last year.