You are here: Home / Archives for Beta Male 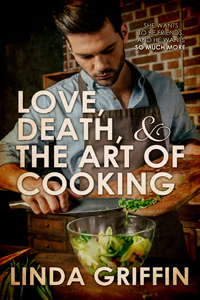 She wants to be friends. And he wants so much more.

Software engineer Reid Lucas loves to cook and has a history of falling in love with married women. When he leaves his complicated past in Chicago for a job in California, he runs into trouble and must call a virtual stranger to bail him out of jail. Alyssa Knight, a tough street cop waiting for a church annulment from her passive-aggressive husband, is the roommate of the woman Reid calls for help, and she reluctantly provides bail for Reid. He falls for her immediately, and cooking for her is an act of love. She just wants to be friends, but they keep ending up in bed together. When his boss is murdered, Reid is a suspect—or is he the intended target?

What Inspired You to Write Your Book?
As often happens, more than one idea was needed. I had been thinking about writing about a man who likes to cook, considered having a couple meet when the police officer heroine gives the hero a ticket (which is not quite how Reid and Alyssa meet), and wanted to write about sisters or roommates named Jane and Alyssa. Somehow it all came together when the plot was triggered by a “What if?” question raised by an entirely different story.