You are here: Home / Archives for Desert Palm Press 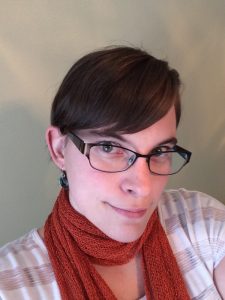 About Kellie Doherty:
Kellie Doherty is a queer science fiction and fantasy author who lives in Eagle River, Alaska. When she noticed that there wasn’t much positive queer representation in the science fiction and fantasy realms, she decided to create her own! Kellie’s work has been published in Image OutWrite 2019, Astral Waters Review, Life (as it) Happens, and Impact, among others. Her adult sci-fi debut novel—FINDING HEKATE—came out in April 2016 from Desert Palm Press and the sequel—LOSING HOLD—came out in April 2017. She's currently working on a five-book adult fantasy series. The first book SUNKISSED FEATHERS & SEVERED TIES (March 2019, Desert Palm Press) won a 2019 Rainbow Award. The second book CURLING VINES & CRIMSON TRADES is launched on November 30, 2020! An excerpt from CURLING VINES won first place in an Alaska Writers Guild Fiction contest in 2020.

What inspires you to write?
So many things inspire me to write! Favorite books or shows might spark a different idea, music might give me a specific feeling to play with, and research often gleans some pretty fantastic nuggets of inspiration. My family and friends are often a source of inspiration for me, too, even if they don't quite know it. Even my cats help me with animal-type inspiration. (For example, Zora, the winged fox-like creature from SUNKISSED FEATHERS & SEVERED TIES, is heavily based on my two cats! How they acted and reacted to things, how they played and fought really helped me when writing Zora.) And then again, sometimes the story just…comes to you, or the characters walk into your life and you have to write about them. For my most recent work, CURLING VINES & CRIMSON TRADES, I was heavily inspired by watching staff fighters since one of my characters Jax uses a staff as her main weapon. I also watched quite a few nature videos to see how vines would work since they feature heavily in my main character Orenda's life.

Tell us about your writing process.
Funny thing! I used to be a 100% seat-of-the-pants writer. I wrote my science fiction duology (FINDING HEKATE and LOSING HOLD) with that mindset of…let's just see where this will go. I often do the same with flash fiction pieces and short stories. But then I decided to write a five-book fantasy series and I just had to become a outliner. Normally I write out the big action goal for the story first – so for CURLING VINES it's about a woman who's trying to save her kidnapped wife by doing all kinds of nearly impossible tasks – then the character goals – so what the story is actually about/the heart of it, a woman who is trying to reconnect with her broken crafting/magic and learn to trust again – and then the sub-character goals. After that, I go chapter by chapter and outline the whole thing! Oooo, I haven't actually created character sketches before, but I usually have character boards/aesthetics with images of what my character is like. I recently commissioned my four main characters from Jhoca, an artist I discovered on Twitter, which was SUCH a treat for me. For daily/weekly practice, I'm a weekend writer! I have a really busy schedule during the week and quite frankly I'm usually too tired to write after work anyway, so I do most of my writing on the weekend. I carve out a few hours on both Saturday and Sunday and really sink into my world. I find that listening to instrumental music is helpful; right now it's a LORD OF THE RINGS soundtrack since I'm writing fantasy!

How do you develop your characters?
Creating characters is one of my most favorite things to do as a writer. I love crafting backstories and wounds, past loves and family drama. The story that came before made the character who they are right now, after all. It's important for me to build that up and know who the character is before I start writing. I always have a direction where I want the character to go, a wound they need to heal or a lesson they need to learn. But sometimes when I'm actually writing, the characters do go off on tangents! I normally write out whatever scene I'm inspired to at that moment then go back and see if it fits with where I'm trying to take the character. Sometimes it fits, sometimes it doesn't. If it's better than the original idea I had, I'll weave it into the rest of the narrative. If it doesn't work, I chop it out and save it for later! Hmm, I've heard of characters "talking inside writers heads" or how they won't "be quiet" but my characters don't talk to me in that way. I do think about conversations they might have and how they might converse back though, so that's something.

Who are your favorite authors?
I have lots of favorite authors, as do all writers. My current favorites are V.E. Schwab, Becky Chambers, Samantha Shannon, and Tamsyn Muir, but more are added literally every month!

What genres do you write?: Fantasy and Science Fiction, Romance