You are here: Home / Archives for emotional scars 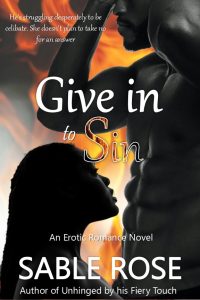 Targeted Age Group:: 18 years and over

SAINT vs. SINNER: WHO WINS?
He’s struggling to be celibate, to resist her charms. She doesn’t plan to take no for an answer…
Sassy and uninhibited TV host, Sade Braithwaite has an assignment: find a way to get Soma King, the hottest model in the country on her show.
Not an easy task because he doesn’t do interviews. This is one assignment she isn’t looking forward to.
The guy had dropped out of the seminary to become a model and his nickname is Saint Soma—of all things—because he is rumored to be celibate.
WTF? Boring!
But just one glance at the sexy, over six-foot-tall giant is all it takes for Sade to fall head over heels in lust.
She’s used to getting what she wants and now she’ll do everything in her power to make him give in.
Noble, reserved Soma really wants to do the right thing and resist this annoyingly enticing woman, but in the back of his mind, he knows…
He’s no match for her.

What Inspired You to Write Your Book?
I already birthed the character of Soma King, the shy and restrained ex-seminarian who models for a living, in a previous book. I needed to write a new standalone novel based on my last romance book series, the Unhinged Romance Series. That's why I created Soma King's character and why I created the character of Sade Braithwaite, a feisty, free-spirited woman who makes it her mission to seduce him. I needed a heroine who is almost the opposite of my reluctant hero.