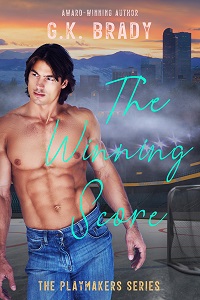 The Winning Score by G.K. Brady

Quinn Hadley only does one thing as well as he plays hockey—wheeling the ladies. He’s the envy of his teammates. With puck bunnies on speed dial in every city, he never spends a night alone unless it’s by choice. He has a certain type—hot, blond, and easy. So when he meets Sarah Nelson, bagging her is nowhere on his radar. Not only is she a brunette, but her fiery, take-no-prisoners style is a turn-off. Plus, she’s his teammate’s sister and totally off-limits.

But his disabled mother—who’s just been foisted on him—loves Sarah. And not only is his mom methodically ruining his sweet bachelor lifestyle, but she keeps firing every caregiver Quinn hires for her. So when COVID-19 puts everyone on lockdown, Quinn offers Sarah an opportunity she can’t refuse, despite the warning bells clanging in his head.

Sarah Nelson is fleeing a devastating breakup and has nowhere to go but to her brother’s place in Denver. An engineer by training, she needs a job pronto so she can yank herself back up on her own two feet. But COVID-19 stops her dead in her tracks. So when Quinn Hadley offers her a temporary job making stupid money, she has a hard time refusing—despite the fact she has to live under the same roof with a guy who turns her stomach. She’s had too much experience with charmers like him, and Quinn Hadley is the biggest charmer of all. With a track record to prove it. But it’s the other side of Quinn she never expects, and it’s far more lethal than his public persona.

When Mr. Smooth and Ms. Prickly shelter in place together, not even his mansion is big enough to contain the fireworks. These two are sparks colliding with gas: combustible and explosive.

Someone’s bound to get burned.

END_OF_DOCUMENT_TOKEN_TO_BE_REPLACED 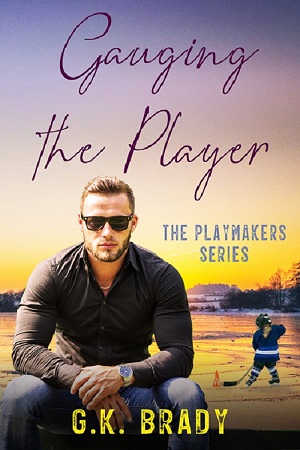 Gauging the Player by G.K. Brady

Gage Nelson doesn’t do one-night stands. In fact, he doesn’t date. He’s too focused on leading his team to the playoffs. Besides, he doesn’t need more women complicating his life—he’s got enough of that already.

But when a blue-eyed beauty bowls him over, he breaks his own rules and lets himself go with the flow for a night. A night he intends to be the first of many. When he wakes up, though, his dream girl’s gone, and he has no idea how to find her. He’s haunted by the woman he can’t get out of his mind.

Lily Everett is caught in a past she can’t let go. One night of steamy sex with a hot hockey hunk helps her forget—until she wakes up, and guilt grabs her by the throat and won’t let go. She runs and doesn’t look back. And that’s okay because hockey players are, well, players, right? Guys like him aren’t looking for long-term—and neither is she.

When a chance confrontation brings them back together, she realizes she’s not only misjudged Gage Nelson, but she’s misjudged her own heart’s yearnings. What began as a one-night stand threatens to undo her carefully laced-up world.

Once-stung, twice-shy, Gage is reluctant to get close. But it doesn’t take long before his hesitation is flattened like a player skating up ice with his head down. He sets out to win Lily the same way he wins at hockey: with patience and persistence. Until he’s thwarted by a rival he’s never met.

Can Gage convince Lily to give up the ghosts of her past and make room for him in her heart, or will she freeze him out forever?