You are here: Home / Archives for italian 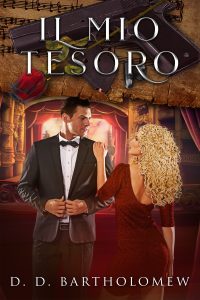 Ah, La Cosa Nostra, the bane of Antonio Marinelli’s existence. Raised to enter the ‘Family business’ he chose music instead of murder. He’d memorized his life’s libretto: bed ‘em and forget ‘em. So far it had worked out well… until Anna Ivanov came along and changed all the lines.
Anna had been assigned as Antonio’s personal assistant. After meeting him at the airport she knew what part in the opera he had in mind for her and swore she wouldn’t audition for it. But when targeted by a drive-by shooter, his Family steps in. Now there are a bunch of alpha-males trying to control her every move.

Then she’s kidnapped and the fun really begins.

Reviewed in the United States on November 29, 2021
Wesley H. Higaki
Il Mio Tesoro is an enjoyable romantic suspense novel. It is the story of Anna, who works for a New York City travel agency. She is assigned to be the personal assistant to Antonio, a famous and handsome opera singer while he is in the city. Antonio has a reputation with women, so Anna is cautious about meeting him. When they meet, sparks fly. Anna tries to maintain a professional relationship, but the magnetism between them is irresistible. But there is a dark side to Antonio.
Rumors that he is part of a crime family come to a head; when Antonio’s brother, Luca, arrives.
Antonio and Anna’s romance blossoms, but his involvement in his family’s business grows. Anna finds herself in the middle of it.
F liked the way the story unfolded. The characters were realistic and well-developed. The situations they encountered were suspenseful and entertaining.
The writing is clear and clean. The setting descriptions were vivid — they made me feel like I was there.
I liked how the chapters provided alternating character points of view, presenting different perspectives as the action progressed.
I highly recommend this book to anyone that likes romance and suspense.

What Inspired You to Write Your Book?
I had a dream. The basic plot was played out in front of me and when I woke up, I immediately wrote down what I remembered. Later on, I filled in the blanks. It was as if the universe was telling me I had to do this. How could I ignore that? 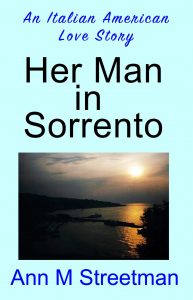 Her Man in Sorrento by Ann Streetman

When Sarah Millerman meets Nathan Ferrari, her vacation in Italy takes unexpected turns as breathtaking as the Amalfi coast drive. Charming, handsome Navy Commander Nathan Ferrari is staying at his Aunt Alessa’s beach house in Sorrento, while he is on annual leave from Naval Base San Diego. As Nathan puts it, “You’re an American on vacation. I am an American on vacation. It makes sense for us to have some fun together.” Sarah intends to keep the relationship light and flirty and uncomplicated, as they enjoy dinners under the stars at the beach house and day trips around the Amalfi coast and an overnight visit to his aunt’s vineyard in Tuscany.

Both Sarah and Nathan have been hurt by lost loves in their past. Come along to experience their romance as it develops in scenic southern Italy and San Diego. It’s a sweet Italian American romance with a red, white, and blue twist you don’t want to miss.